Almost a year from the date of the original first pitch, Atrium Health Ballpark will debut as a baseball field for the first time when the Charlotte 49ers welcome the Appalachian State Mountaineers in a Division I, non-conference match-up on March 23 at 6 p.m.

Before the COVID-19 pandemic forced the cancellation of the baseball season in 2020, the Kannapolis Cannon Ballers planned to open the $52 million sports and entertainment venue anchoring the revitalized downtown on April 16th last year. Without baseball, Atrium Health Ballpark operated as a city park starting last spring and quickly became a top destination in Kannapolis for visitors anxious to enjoy the outdoors and ballpark amenities safely on a daily basis.

Under second-year head coach and Charlotte native Robert Woodward, the 49ers are currently 8-3 following an upset victory over 14th-ranked Tennessee on March 9 and with previous series wins against Morehead State and William & Mary. Last season, Charlotte earned a 9-8 record, including a 9-8 win over No. 9 NC State, before COVID-19 shut down the season.

“With the help of the Kannapolis Cannon Ballers, we have the opportunity to play the first-ever baseball game in their state-of-the-art Atrium Health Ballpark,” Woodward said. “Charlotte and Kannapolis are two baseball towns, so this event is a special opportunity for us both to come together and give people a chance to get out and watch baseball again.” 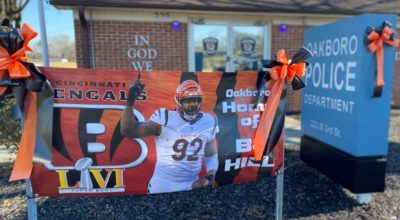