Though she was initially hesitant to speak on the subject, when asked about the American Dream, author Karla Cornejo Villavicencio didn’t hold back.

While she acknowledges many people see her as the perfect embodiment of the national ethos — an undocumented immigrant who graduated from Harvard University, became a finalist for a National Book Award and has written for The New York Times, The New Yorker and The Atlantic, among others — Cornejo Villavicencio says luck played an outsize role in determining her success. Many immigrants who work as hard if not harder, she said, often don’t achieve the same level of success.

Even though her backstory provides hope that the American Dream can be realized, she spoke of how incredibly difficult it is for someone like her to achieve what she’s achieved in her young life.

This was just one of the subjects Cornejo Villavicencio touched on during a roughly 90 minute Zoom session March 11 with Pfeiffer University students and faculty and members of the community. The event was held in conjunction with Pfeiffer and the Stanly County Arts Council. 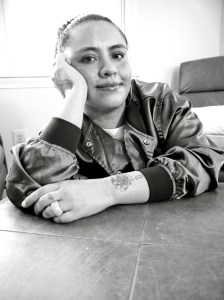 Karla Cornejo Villavicencio spoke with Pfeiffer University students and members of the community on Zoom Thursday about her novel “The Undocumented Americans.” Photo courtesy of Danielle Donelson.

Most of the conversation, which was moderated by Pfeiffer English professors Dr. Ashley Schoppe and Dr. Danielle Donelson, focused around her debut novel “The Undocumented Americans,” published last year, in which Cornejo Villavicencio chronicled her own immigration story while also profiling undocumented immigrants across the United States. While she used to be on DACA (Deferred Action for Childhood Arrivals), she is now a legal resident and resides in New Haven, Connecticut.

She said one of her goals in writing the book was to push back against the one-dimensional caricatures she saw of Latinx and undocumented people often portrayed in the media. Instead of talking with DREAMers or immigrants who had just crossed the border, Cornejo Villavicencio focused on the people who “don’t inspire hashtags or T-shirts” such as day laborers, housekeepers and construction workers. In her book, she meets workers who helped clean up ground zero after 9/11, families in Flint, Michigan still scared to drink the water and herbalists in Miami.

Her writing combines serious reporting with magical realism and the Latin American genre of testimonio, a first-person narration of socially significant experiences.

“I write the way that I process the world,” she said.

When speaking to the audience, which included many burgeoning student writers enrolled at Pfeiffer, Cornejo Villavicencio emphasized the importance of community, especially during the pandemic, and finding the right mentors that could help set them up for the future whenever they leave the university.

“Surround yourself with people who will cheerlead you and root for you,” she said, adding that taking care of one’s mental health is also incredibly important.

Cornejo Villavicencio created a series of ethics that governed how she reported on and wrote about undocumented immigrants, which are already a very vulnerable population. Almost all of the names in the book were changed to protect the identities of her sources, she never asked about border crossings or why her sources decided to come to America and she took notes by hand instead of with a recording device because she didn’t want to intimate her subjects.

“You’re young, but if you’re going to write about a vulnerable population, come up with an ethics,” she told the audience.

At the end of the session, when asked what was the one thing Cornejo Villavicencio wanted people to take away from her book, she mentioned the importance of tipping (which is discussed in the novel).