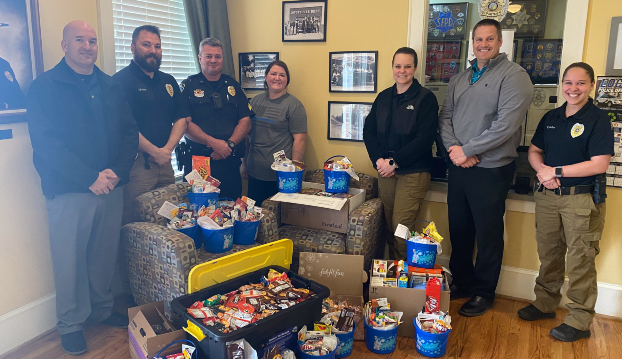 While law enforcement organizations tend to receive an outpouring of community support during major holidays such as Christmas, one Locust teenager wanted to ensure that their hard work would be recognized during the less-publicized Easter season.

Wanting to honor both the memory of her late father, former Locust Police Chief Steven “Smitty” Smith, and the officers with Locust Police Department, Riley Smith began a community service project in early February to solicit enough donations from local businesses to provide Easter baskets to every officer in the city.

“She wanted to show them not only that she still cared for them but the community did as well,” said her mother Melissa Smith, noting that Riley, like her father, has always been someone who enjoys helping other people, especially her blue family.

The service project ran from the beginning of February through March 15. Items were dropped off at First Baptist Church of Locust, Locust City Hall and City Wide Exterminating.

Riley received so many donations from businesses and schools — West Stanly Middle School collected around eight boxes worth of items — that many other law enforcement agencies in the county were added to her list of recipients. 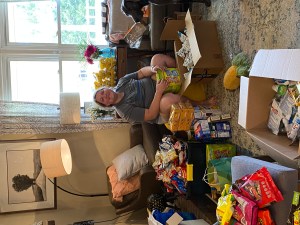 Riley Smith sorts items into boxes that were distributed to law enforcement agencies across Stanly County this week. Photo courtesy of Melissa Smith.

With the many hurdles law enforcement has had to tackle over the past year, including the pandemic and messages to “defund the police,” the various agencies were grateful for the welcome gifts.

“Our officers were blown away at the level of support shown by the amount of donated items collected and it speaks to the support of law enforcement by businesses and citizens of Stanly County,” Locust Police Chief Jeff Shew said.

“I believe Riley’s project showed that even though Chief Smith passed away last July, he is still working to support his officers and law enforcement in general through his daughter and in the support of the community,” Shew added. “I’m sure Chief’s looking down on Riley and is extremely proud of her for her efforts with this project.”

Since Riley’s “Baskets for Badges” project was originally aimed at just helping the Locust Police, her efforts caught many of the other agencies by surprise.

“It was really great to see the reactions and the surprise and the gratitude of the different officers at the department when we showed up with boxes of goodies for them,” Melissa said.

“We can’t thank Ms. Smith and her daughter enough for the baskets,” said Sheriff Jeff Crisco. “They were very much appreciated.”

“It warms my heart that his daughter is carrying his legacy and doing things to recognize him,” added Oakboro Police Chief T.J. Smith, who worked with Chief Steven Smith for several years during his time in Locust. “He may be gone, but he’s definitely not forgotten.” 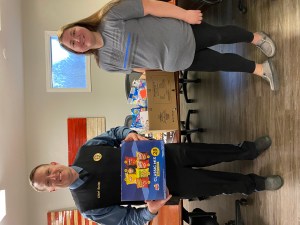 While she wasn’t asking for money, Riley received around $1,600 from the public, which she used to purchase gift cards for the Locust officers. After speaking with the department about key resources the officers needed, Riley also donated $100 to help LPD purchase 120 drug testing kits.

“It was phenomenal how much she was able to collect above what her original goal was,” Melissa said.

With the family still adjusting to life without Chief Smith, Melissa is proud that her daughter was able to use her father’s memory as a way to honor and celebrate law enforcement agencies across the county.