PEEKING INTO THE PAST – As March Madness roars, here is a look at the origins of basketball in the county 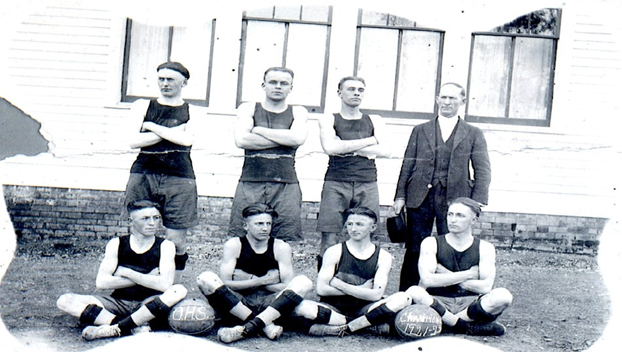 Today’s photo is of the 1921-22 Oakboro High School basketball team.

The first reference to a basketball team in Stanly County that has been found is a girls team that was organized at the school in New London in November 1911. An article in the Stanly Enterprise mentions they had uniforms but no record of them playing against another school has surfaced.

Mention of a boys team in Norwood was found in the Feb. 4, 1915 edition of the Albemarle Enterprise and a team at Fairview school had begun playing by the fall of that year.

During the spring of 1917 there were five schools (New London, Fairview, Flintridge, Palmerville and Stanly Hall) that were all competing for a trophy sponsored by Morrow Brothers store. According to the Nov. 27, 1917 Albemarle Enterprise, these were the only teams that competed because basketball wasn’t yet taught in other schools.

A county athletic association was formed in November 1917. One of its goals was to increase participation in basketball through more of the schools. By the spring of 1920, additional teams were now competing from Albemarle, Badin, Oakboro and Norwood.