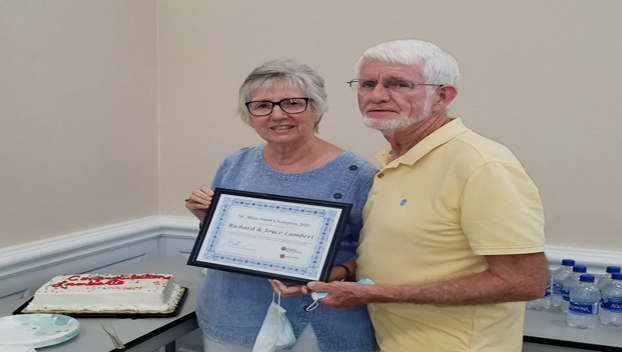 The North Carolina Main Street Program announced recently that Richard and Joyce Lambert of Albemarle were two of 37 recipients of the 2020 Main Street Champions Award.

“The Lamberts are dedicated people who work tirelessly and give of themselves to make Albemarle a great place to live,” said Albemarle Mayor Ronnie Michael. “Their hard work as part of the ADDC goes largely unnoticed by many, but not by me and the leadership of the City. I’m excited they have received this honor and we are fortunate to have them as citizens of Albemarle.”

In nominating the Lamberts for this honor, the Board of Directors of the Albemarle Downtown Development Corporation offered the following:

“Stanly County natives Richard and Joyce Lambert returned to Albemarle in 2005 to spend their retirement. Instead of the rest and relaxation that retirement brings, the Lamberts are busier than ever, serving on the Albemarle Downtown Development Corporation’s Design Committee for the past 10 years.
“Richard and Joyce are avid gardeners who have lent their green thumbs to keep downtown Albemarle beautiful. From flowerbed and hanging basket plantings to planning for the annual Holiday Tour of Homes fundraiser, the Lamberts have played an integral role in both funding and hands-on labor for downtown beautification projects.”

“There are three keys to economic development success: public-private partnerships that share in the effort and jointly celebrate the successes of projects; economic development strategies that leverage local assets for authentic enhancements and improvements; and local champions that are leading the effort every step of the way,” added Kenny Flowers, assistant secretary for Rural Economic Development at the North Carolina Department of Commerce. “The Main Street program throughout the state, is the epitome of the implementation of these three key components of success.”

“We know that the success of downtown districts is because of the people behind the effort,
and each year, we recognize the visionary individuals that have a strong sense of commitment to their community. They develop projects that improve quality of life, grow cultural and recreational development, renovate historic properties and spur investment and create jobs and businesses,” said Liz Parham, director of the N.C. Main Street and Rural Planning Center.

Since 2000, 804 citizens of North Carolina have been named Champions. The Albemarle City Council honored the Lamberts publicly at a recent council meeting.

“We feel that we have a beautiful downtown and that there are lots of things that we can continue to do with the streetscape (program),” Joyce Lambert said during the council meeting.