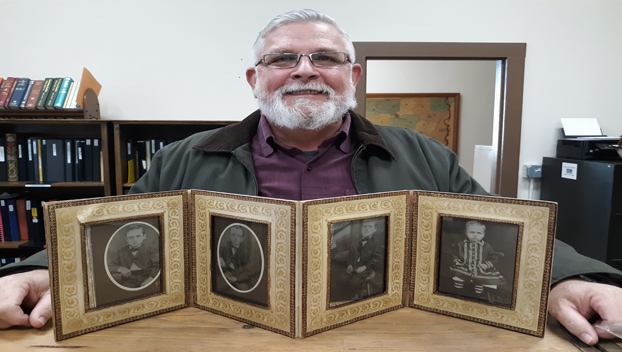 In the history of eastern Cabarrus County, Barrier is a familiar surname.

Rufus Alexander Barrier (1836-1876) is known as one of the founders of Company H, 8th NC Regiment, a group of 58 volunteers mustered at the Western Carolina Male Academy (now home to the Eastern Cabarrus Historical Society Museum) to serve in the Civil War.

After the war, Barrier returned to Mount Pleasant and married Martha Roxana Anthony, daughter of a local minister.

Together they had six sons, four of which lived to adulthood.

In April 2020, photos of those four “Barrier boys” somehow turned up in Rockland, Maine, and began a long journey back to Cabarrus County.

Kathy Zvanovec of Hope, Maine, is an antique seller, collector and self-described “relocator” of historical items. When she stumbled upon the Barrier photographs at a Goodwill Store, she realized they were historic and set to find out where they belonged.

Fortunately, the pictures were labeled with the boys’ names, and Zvanovec started hunting for living descendants. She searched obituaries, sent emails, made calls, but was largely unsuccessful in finding the boys’ home.

In November, through the Find-A-Grave website, Scott Culp of Charlotte saw the pictures
Zvanovec had posted, and recognized the names from his own family tree; he is a second cousin twice removed. Culp was thrilled to find the photographs which, he believes, are the only pictures of the brothers as young boys.

Earlier this year, Culp donated the photographs, in both his and Zvanovec’s names, to the Eastern Cabarrus Historical Society Museum and Library, where they will be available for others doing genealogical research.

Now at the conclusion of a long, strange journey for these pictures, Zvanovec says, “It has been a wonderful group effort to find, document that these photographs are what they appear to be, and to get them to the Eastern Cabarrus Historical Society where they belong.”