SPIRIT OF STANLY: Even during pandemic, Stanly housing market is booming 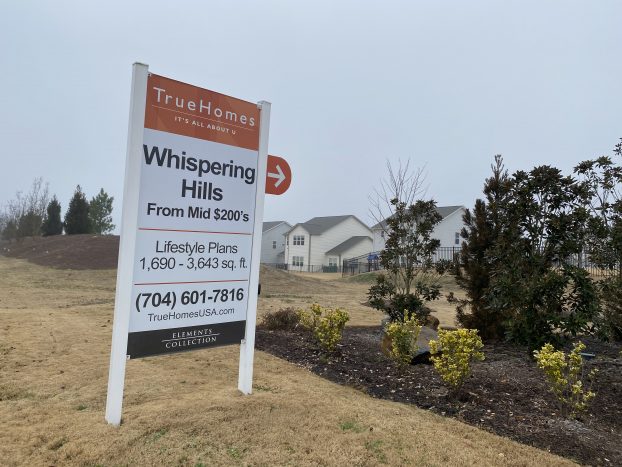 The Whispering Hills subdivision in Locust.

“This will be the biggest home I’ve ever had,” said Katen, who resides in California.

It’s a 2,500-square-foot, four-bedroom, two- and a half-bath home. Her furniture arrived in October and was placed in the house.

Even though Katen’s realtor Larry McGuire showed her several other properties last spring, the house was always on her mind and she ultimately purchased it in the summer via Zoom/FaceTime.

Due to an exorbitant real estate market and a high population density, Katen wanted to leave her home near San Francisco, where she’s lived her whole life, and move somewhere with more affordable housing and a more spacious environment. She decided on North Carolina and visited twice before the pandemic hit.

“I got there and… it was just a breath of fresh air for me,” she said.

Katen was smitten with the small-town charm of Albemarle. She also looks forward to visiting the county’s natural treasures like Morrow Mountain State Park and the lakes.

But there’s one catch: With Katen living in northern California and caring for her mother who has been in the hospital, she has not actually seen the house in-person, though McGuire did give her a virtual tour of the property. She is currently repairing her own home and hopes to relocate to Albemarle in the coming weeks. However, with the coronavirus pandemic still rampant in much of the country, especially California, she doesn’t have a firm timeline for when she expects to move.

In order to be comfortable purchasing a home she’d never actually visited, Katen and McGuire developed a strong enough rapport that she came to trust him and his expertise.

Katen’s situation is just one example of how the coronavirus pandemic has affected the real estate industry over the past year. Many clients and realtors are taking to online platforms to collaborate rather than meeting in-person. Many house tours have also transitioned to the digital realm.

While prospective buyers might be going through additional loopholes during the pandemic, the housing market as a whole experienced a boom last year.

Home sales in the Charlotte region through December, which is the most up-to-date data, were up 5.5 percent compared to the same time in 2019, according to data from the Charlotte-based Canopy Realtor Association. The analysis applies to 16 counties across the Charlotte area, including Stanly County.

When focusing exclusively on Stanly, however, the increase was even larger. Home sales last year were up 12 percent through December, with 797 properties sold. A total of 711 properties were sold through November of the previous year. Pending sales were also up around 13 percent compared to 2019, while both median sales prices and average sales prices were up compared to the year before.

“We’ve had real estates up, the hottest it’s ever been in our area,” said Lee Allen, broker and owner of Re/Max Town and Country in Albemarle.

He noted that with many people no longer commuting to work, homes have become even more desirable as a place to both live and, since the pandemic, conduct business.

Allen said since the pandemic one of his biggest requests in searching for homes has been the inclusion of an office space where people can work.

“I would say that might be the number one question I get now,” he said, noting that it was something he was rarely asked about before last year.

Wallace Crawford, an Oakboro realtor who works for Mathers Realty, said the biggest reason why the local housing market experienced so much success last year was due to low interest rates, which spurred many people to look into buying homes.

“As long as those interest rates stay low, the people are going to have a desire to buy, especially when rent rates are so exorbitant,” Crawford said.

With so many people wanting to purchase homes, developers in the area that have access to large tracts of property are working quickly to develop them, County Planning Director Bob Remsburg said. “Because the demand is so high, they’re able to command a fairly good price for the properties.” 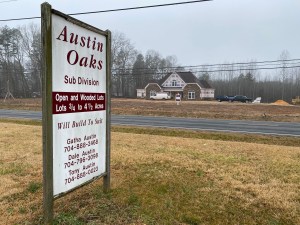 The Austin Oaks subdivision is in Stanfield.

The Albemarle City Council in December approved a preliminary plat and a conditional use permit for a cluster subdivision off Moss Springs Road of 52 single family lots. The Stanfield Board of Commissioners has also reviewed a proposed 30 home subdivision off South Love Chapel Road.

The online real estate marketplace Zillow predicts that as strong as 2020 was for the housing market, 2021 could be even better.

According to Zillow, for a standard two bedroom, two bathroom, there were more than 160 homes in Stanly for sale in early 2021, with Albemarle making up the bulk of the total with roughly 80 homes. The website lists around 400 such homes sold in the county last year.

Allen said Locust, due to its proximity to Charlotte, and North Stanly, because of Pfeiffer University, are the areas where houses have really been selling over the last year.

He noted the only thing that limited the sales last year from being even higher was a lack of inventory.

According to Canopy Realtor Association data, homes in Stanly County were on the market for about two less weeks (46 days) throughout last year than they were in 2019 (61 days). When specifically zeroing in on home sales for December of last year, the discrepancy is even more prominent. Homes were on the market for only 28 days before being sold compared to 87 days in December 2019.

“We had more buyers than we had homes,” McGuire said.

One reason realtors were not as affected by the pandemic as people in other industries, Crawford said, was due to the influence of the National Association of Realtors, which wields substantial power as a lobbying organization. NAR helped make sure realtors were listed as essential workers during the early stages of the pandemic, which allowed them to continue working without missing a beat.

“We didn’t have to take much downtime and we were constantly daily getting emails for the first month to two months of the onset of COVID on what our protocols were as realtors, what we could and couldn’t do and best practices to keep everybody safe,” Crawford said.

Throughout much of last year, real estate agents also adapted to how they interacted with prospective buyers. Instead of in-person home tours and open houses, virtual tours became more of the norm.

With COVID-19 spreading quicker in more urban areas, many residents in cities like Charlotte relocated last year to rural counties like Stanly, Crawford said, noting that the county’s low tax rate was a key incentive.

“You can get more dirt underneath your feet cheaper than anywhere else,” he said about Stanly. “We’re not quite the sleepy little place that we used to be.”

Though anxious about driving across the country by herself, which she’s never done before, Katen, the Californian, is ready for her big move to Albemarle.

“I’m so excited and delighted to get there,” she said. “I feel like it’s going to be a great home for me.”