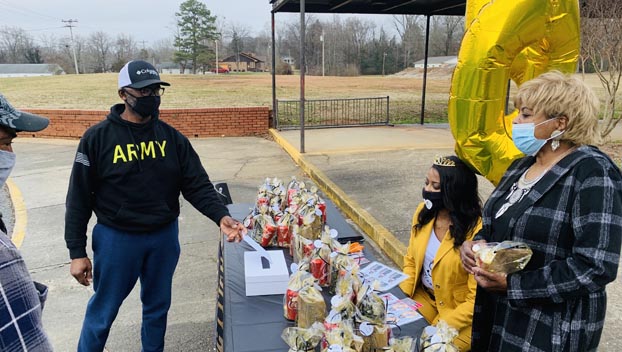 Milestone birthdays in modern culture have become moments for people to have their lives celebrated by friends and loved ones.

One recent celebration, however, reversed the process as the person whose birthday it was sent blessings forward.

Pamela Brown, an educator who spent many years teaching at a former charter school at the E.E. Waddell Center and East Albemarle Elementary, recently celebrated her 50th birthday.

A planned celebration at the Waddell Center for family was only part of Davis’ plans for her special day.

Brown advised her children not to waste money on presents this year. She decided she wanted to start a scholarship or annual award.

She said God laid on her heart to start an award program for kids with her own money.

In working with Dr. Erik Johnson, the principal at East Albemarle Elementary, Brown started a project called Planting a Seed.

She got submissions from three age groups expressing what they would do with $50 via a written prompt. The prompt asked children how $50 could make a difference in their life or someone else.

Brown teaches remotely for Winding Springs Elementary School in Charlotte, and she also had students do the same thing.

One student from Charlotte said she needed the money for school uniforms by drawing a picture of a clothesline using a computer.

Johnson “was so supportive that he sent (the project) out on his newsletter weeks ago,” Brown said.

Because of COVID restrictions, Brown said she can’t present them in person as she would have wanted.

She started Planting a Seed with $250 and hopes to raise more money to award.

Davis took donations on a recent Saturday afternoon at the Waddell Center while giving out gift bags to contributors. She also enjoyed a paint and sip event for her birthday with a small group of family and friends.

Part of the new project is to encourage children, she said.

“I like to smile, so I always do that in my expressions of encouragement, which I do in my donations and serving,” Brown said. “I’ve been called to be a teacher…at the end of the day, it’s a mustard seed. It can grow and flourish. Things can come out of a small seed.”