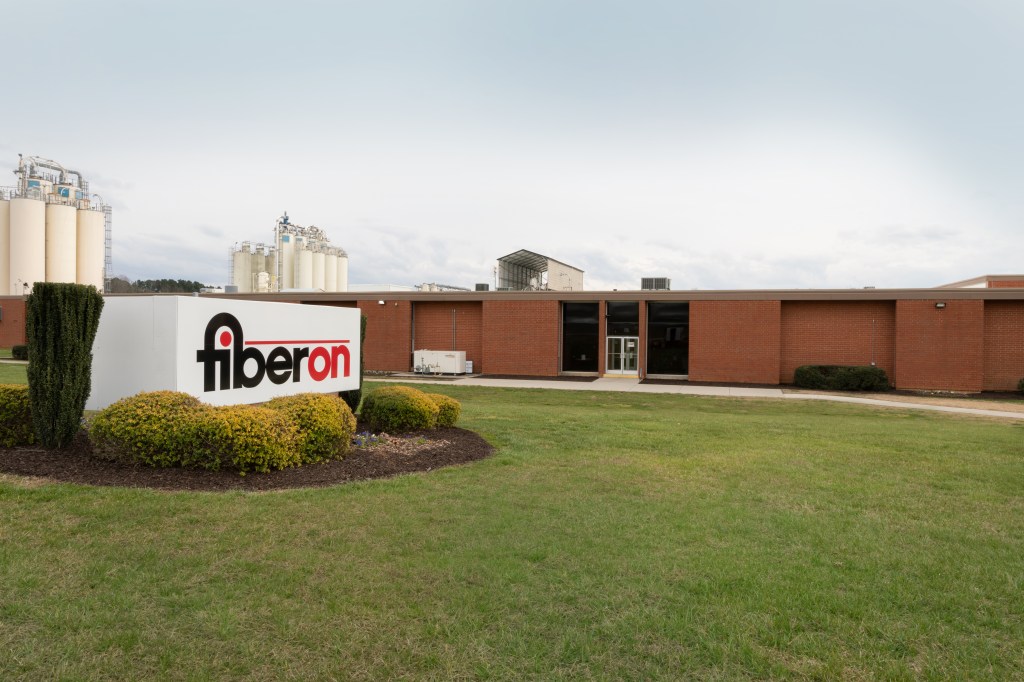 Fiberon is located in New London. Photo courtesy of Fiberon.

Recyclable materials most people would deem disposable such as shopping bags, shampoo bottles and stretch film packaging are essential ingredients that help form the core products for the decking company Fiberon.

“In 1997, we had one or two machines…and 20-some-odd years later, we’re a $200 million company,” Vice President of Operations and Supply Chain Mike Huskey said. He’s worked at Fiberon for around 10 years after spending the majority of his career at Collins & Aikman in Albemarle.

Fiberon, which was sold in 2018 to Fortune Brand, a Fortune 500 company, employs around 440 workers in its three New London facilities. The products are shipped to Home Depot stores across the country and Canada and numerous wholesale distributors.

Fiberon decking products appeared on the HGTV show “Brother vs. Brother” in June 2017 and appeared on four episodes of “Extreme Makeover: Home Edition” in February 2020, according to marketing coordinator Travis Thornton.

An emphasis on innovation

While it’s still a relatively young company, Huskey said what makes Fiberon stand out is its innovation. The company was the first to develop a hidden fastener system, where screws are fastened from the side and cannot be seen.

Fiberon also was the first to develop covering or capping for the deck composites which provide added protection against the elements. The cap, which contains UV inhibitors, is bonded to the deck material during the manufacturing process. The outer layer is known in the industry as a capstock.

Capped boards are incredibly resistant to staining, fading, moisture and insect infestation and they won’t splinter or degrade, according to the company’s website. All that’s needed to keep them fresh is an annual soap and water clean.

Fiberon was also the first decking company to produce composite PVC railing, according to its website.

Fiberon’s recycling center, which is only a few miles from the manufacturing facility, takes about 70 million pounds of waste and converts it into small polyethylene pellets.

According to its website, using recycled materials “prevents further deforestation and prevents unwanted materials from polluting the earth via incinerators or landfills.” 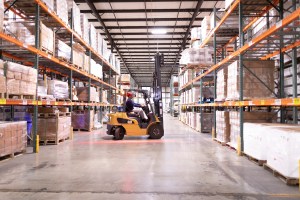 The composite decking is made from a mixture of different materials, including the polyethylene pellets and wood that comes from lumber mill scraps.

During the manufacturing process, multiple extruder machines combine measured quantities of raw materials, which comprise the inner core and capstock. The raw materials are wood flour (acquired from ground-up door frames, window trim and cabinetry) and recyclable plastics. Antioxidants and other surface protectants are also added along with color additives.

When the raw ingredients are mixed, they become melted and the capstone forms onto the wood core, creating a little thin coating, manufacturing trainer Denise Wall said.

When the wooden core reaches the right temperature, the machines deliver it to the dyes, which molds the core with the cap. Once the deck boards have been extruded, embossing wheels imprint wood grain patterns onto the board surface. This creates the realistic wood appearance that differentiates Fiberon products from other brands, she said.

Any scratched boards get grinded up and reused again in the extruder.

“We don’t like to throw anything away, we just grind it up and reuse it,” Wall said.

The decking boards then cool off in water tanks for several hours before inspectors check to make sure the products meet appropriate standards. 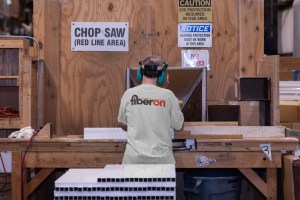 Impact of the pandemic

Since the coronavirus pandemic first began in March 2020, many of the company’s auxiliary employees, like those who work in sales and customer service, have primarily been working from home. Employees who work on the manufacturing floor still come to the facility each day — they just wear masks and do their best to socially distance. Plant manufacturing manager Chris Jack said that around 40 percent of all employees are working from home.

In addition to mask-wearing and social distancing, other safety measures enacted include sanitizing of equipment before the start of each new shift and having employees fill out questionnaires to make sure they have not had contact with others who tested positive.

With more people working from home, many have decided to remodel their decks and outdoor spaces, Jack said, which has resulted in increased business for Fiberon. As a result, while many companies have had to lay off people due to the pandemic, the opposite has occurred with Fiberon. The company has hired more than 50 employees in the community to fill open positions and it has added another 20 jobs ranging from electricians to supervision entry-level positions.

“We’ve been doing a good job of going out into the community and looking for those diamonds in the rough and giving them the training that we need to fill in those positions,” Jack said.

Jack said that no employees have been laid off or furloughed as a result of the pandemic.

Fiberon has also shifted to conducting more online meetings via Zoom or Webex, which Jack sees as the new normal even after the pandemic ends. Instead of employees traveling to meet with officials from other branches of the company, online meetings can occur which are safer and more efficient, he said.

All about the people

Fiberon has a history of eco-friendly products and innovation, but what makes the company really special, according to conversations with workers, is the people.

Wall sees the workers each and every day. Her job is to train and prepare new workers when they first arrive at the company. She teaches employees all of the requirements that come with working at Fiberon, including job descriptions, using measuring tools, spotting defects and understanding the safety measures.

“It’s exciting,” Wall said about her job as a trainer, which she’s done for three years. “Especially when I see someone that’s struggling and then they end up being a great inspector.”

Jack, the plant manufacturing manager, said the best part of the job for him is the relationships he’s formed with his peers and seeing employees grow and develop their skills.

“In just the three years I’ve been here, I’ve seen tremendous individual growth from everyone that has worked here,” he said.