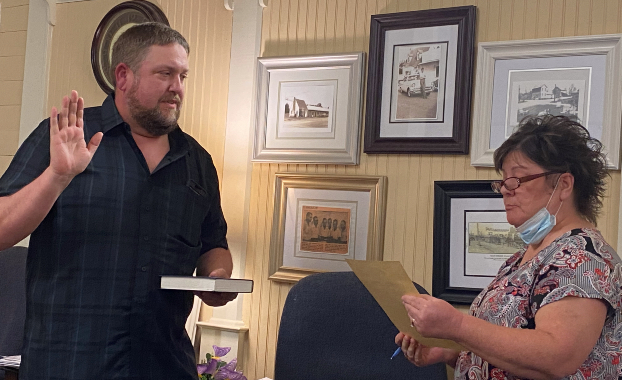 Brent Holbrooks was sworn in as Stanfield's newest town commissioner Thursday night. He replaces James Griffin, who moved out of the town last month.

The Stanfield Board of Commissioners have been reduced in size over the past month as two resignations were publicly announced during Thursday night’s monthly meeting.

James Griffin moved out of the town last month and his resignation was effective as of the March 4 meeting, Mayor Kevin Barbee said. Additionally, Larry Sides put in a notice to resign for personal reasons.

Stanfield native Brent Holbrooks, who runs B.E. Holbrooks, a plumbing and heating and air conditioning company in the town, was sworn in Thursday to replace Griffin.

Holbrooks said Griffin, who reported on public safety issues within the town during each meeting, approached him last month, wanting to know if he would fill his position.

“I’ve been kicking it around for a couple of years (running for office) and I decided I’d get more involved in town,” Holbrooks said about his decision to become a commissioner. He hopes to “make a difference in the town and keep it as a small town.”

Barbee plans to meet with people interested in replacing Sides and then the commissioners will discuss the options before deciding on a replacement, Town Administrator Bridgette Helms said.