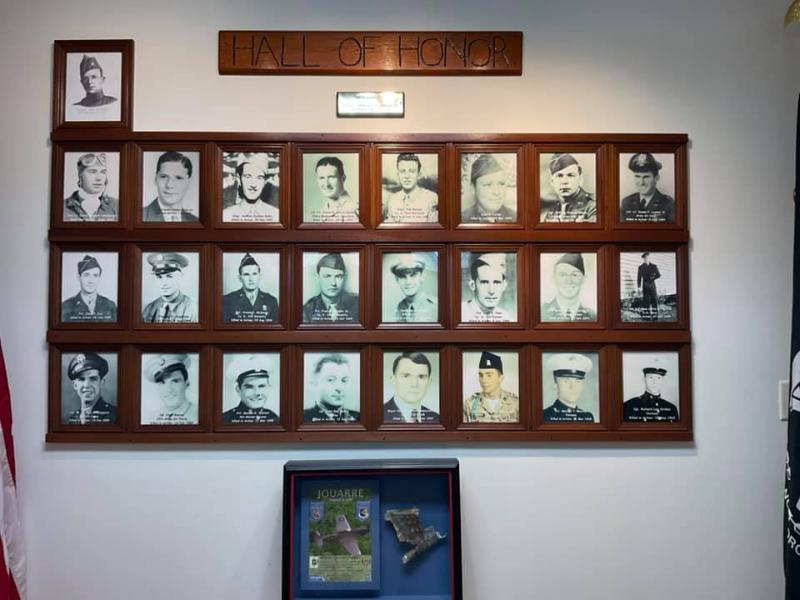 Twenty-five local service members who died during times of war throughout the nation's history appear on the Wall of Honor in Norwood. At the bottom of the photo is shown a part of the airplane in which Lt. James P. Lowder Jr. perished during 1944 in France. Photo courtesy of Les Young.

Members of the James P. Lowder Jr., VFW Post 6183 in Norwood met March 20 to celebrate the 75th anniversary of the group’s founding.

Post 6183, which currently has 64 members, was established in 1946 as an offshoot of Albemarle VFW Waverly Owen Skidmore, which grew from 50 to 500 members the previous year, according to Stanly News & Press articles at the time. Three other county posts were also created in Badin, Oakboro/Stanfield and New London/Richfield.

A total of 25 veterans signed the application of Post Charter to formally establish the group.

After the Charter for Post 6183 was granted, the first official meeting of the Norwood VFW met on April 1, 1946 for a dinner meeting at the Norwood School cafeteria, at which time Ingram announced the appointment of officers.

The second commander was Fred Parker while the trustees for the VFW post were Claude B. Varner, Henry C. Woodall and Charlie Kimrey.

On Aug. 17, 1949, a recorded deed shows that a parcel of land on Swift Island Road was purchased by the James P. Lowder Jr. Post 6183 from the First Baptist Church for $1 and other good and valuable considerations.

The VFW hut, as it was known, served as a community meeting site for many local organizations and clubs throughout the years. The facility remains the home of Post 6183.

During the anniversary gathering, details of the post’s origin were presented by Les Young of Norwood. Post Commander Steve Culp read the names of the 25 local veterans who signed the Application For Post Charter.

Tony Hinson then read the names of the Norwood area service members who died serving their country during times of war.

“Throughout these seventy-five years Post 6183 and its members have been active participants in the social fabric of our community, with local organizations and families using our meeting facility for gatherings, dances, and other occasions,” Culp said in a statement to the paper.