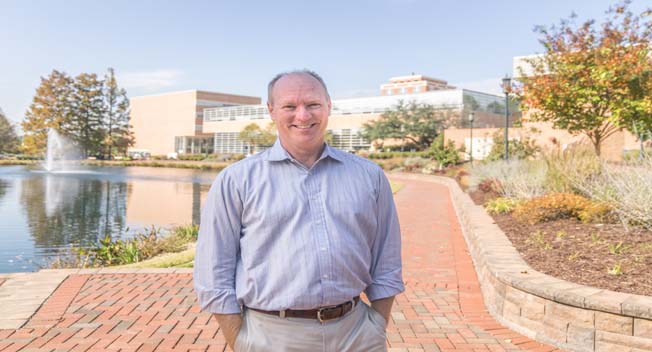 Jeff Michael on the campus of UNC Charlotte. He was director of the UNC Charlotte Urban Institute for 18 years.

This article by Ely Portillo originally appeared on www.ui.uncc.edu .

Jeff Michael, who has served as director of the UNC Charlotte Urban Institute for nearly two decades, is leaving that position to become North Carolina’s next Deputy Secretary for Natural Resources. N.C. Department of Natural and Cultural Resources Secretary Reid Wilson announced the appointment Wednesday.

Michael has led the Urban Institute for 18 years, which has stood as a cornerstone of UNC Charlotte’s engagement and outreach in the region since its founding in 1969. A nonpartisan, applied research and community outreach organization, the Institute seeks solutions to the social, economic and environmental challenges facing our communities. During his tenure, Michael oversaw a number of initiatives to increase its impact, broaden its collaboration and expand access to its data and research assets.

“Jeff’s creative leadership, keen understanding of public policy issues, and commitment to the vitality of our community will be sorely missed at UNC Charlotte and by our civic partners,” Provost Joan Lorden said. “He has left a significant mark on the university and the region. We are fortunate that he will continue to contribute to the well-being of our community through this very important new role.”

In a statement, Wilson said, “I look forward to the new perspectives and vision that Jeff Michael will bring to our team. His experience in conservation, natural resource protection, and economic development will be a great asset to the department.”

A Stanly County native, Michael has long had a heart for land conservation and stewardship of his home state’s natural resources. Before joining the Urban Institute in 2003, Michael served as executive director of the Land Trust for Central North Carolina (now known as the Three Rivers Land Trust) and the Yadkin-Pee Dee Lakes Project (now Central Park NC). He also led the Wildacres Leadership Initiative, a nonprofit program which focuses on bringing diverse people together and fostering collaborative leadership.

As director of the Urban Institute, he led the Carolinas Urban-Rural Connection project, a two-year examination of the ties between the 32 counties in the greater Charlotte region and how those ties can be strengthened and restored. The Urban Institute also launched a new website with expanded policy analysis, merged with the Institute for Social Capital integrated data system, incorporated UNC Charlotte’s Center for Transportation Policy Studies, and launched the Schul Forum series, designed to address specific challenges and bring together policymakers and experts.

The Urban Institute has also collaborated with a number of organizations on innovative projects during Michael’s tenure, such as KEEPING WATCH, a four-year joint effort with university’s College of Arts + Architecture and Lambla artWORKS that spotlighted regional environmental issues with art, data and storytelling.

Working with Mecklenburg County, the Urban Institute launched the first local in-depth study of evictions, culminating in a series of reports and articles that vividly laid out how evictions impact the community. And City Walks, a free, citizen-led annual series of walking tours modeled on the international Jane’s Walks programs, grew from a single walk on Central Avenue to a popular program with dozens of walks and hundreds of participants.

Michael’s final day at UNC Charlotte will be April 30. 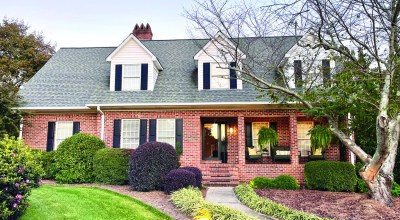