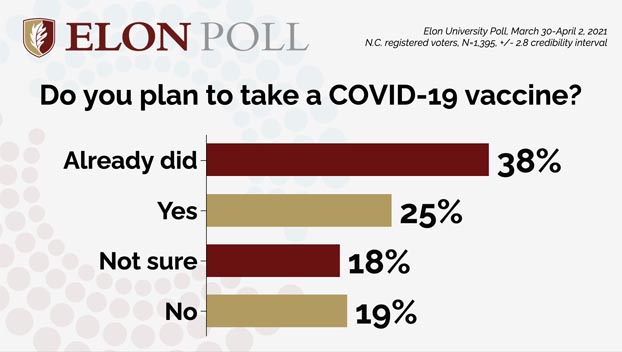 The poll conducted March 30 through April 2 of nearly 1,400 residents found they are optimistic about the pandemic and what lies ahead.

A larger segment of North Carolina residents is now in favor of getting vaccinated against COVID-19, with 63 percent of adults saying they have been vaccinated or plan to, the Elon University Poll has found.

That growth appears to be driven by a shift within the population by those who had previously been unsure about vaccination, according to Jason Husser, director of the Elon Poll and associate professor of political science.

“Vaccine support has increased dramatically since we started tracking attitudes in October 2020,” Husser said. “At that time, only 33 percent of North Carolina residents said ‘yes’ when asked about their vaccine plans. Now, 63 percent have either already taken a vaccine or plan to take it when they can.”

Those against vaccination appear to be little moved by what they have seen or learned since the Elon Poll first surveyed on this topic in October. Across four surveys, the portion of North Carolinians who say they will not get vaccinated has remained relatively steady.

“The size of the group of residents saying ‘no’ to vaccines has consistently been around 20 percent for months,” Husser said. “This continues to cast doubt in my mind about whether some herd immunity goals will be met throughout all regions of North Carolina.”

The survey was conducted by the Elon Poll in partnership with The Charlotte Observer, The Durham Herald-Sun and The Raleigh News & Observer. 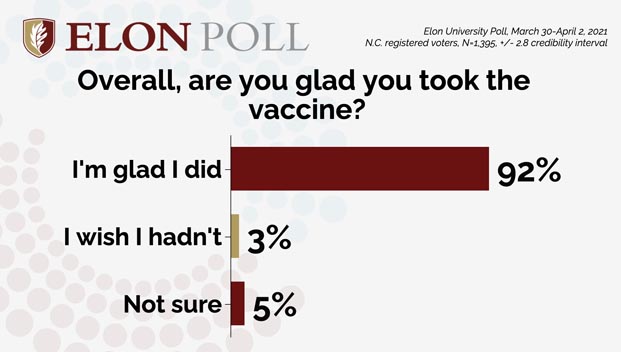 A closer look at vaccination rates and attitudes
Breaking out responses based on various demographic or social characteristics offers a more developed look at what North Carolinians think about COVID-19 vaccinations.

Combining those already vaccinated with those who intend to get vaccinated shows modest variation based on race. While 64 percent of Whites are in favor of vaccination, that falls slightly to 63 percent of residents of other races and 59 percent of Blacks.