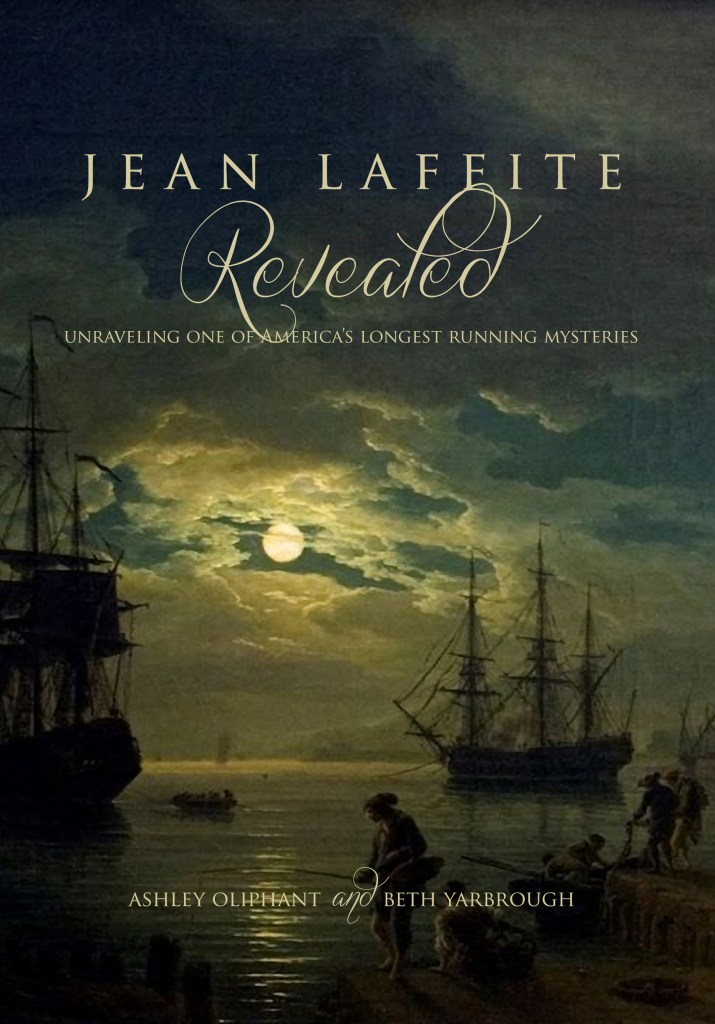 It was quite the colorful presentation Saturday at the Albemarle Neighborhood Theatre as Pfeiffer University English professor Dr. Ashley Oliphant and her mother Beth Yarbrough entertained the public while unraveling the mysteries of the 19th century pirate Jean Laffite.

In their new book, “Jean Laffite Revealed: Unraveling One of America’s Longest-Running Mysteries,” the mother-daughter duo detail the connection between their hometown of Lincolnton and the famous buccaneer.

According to local folklore, the grave of an old Frenchman, bearing the name Lorenzo Ferrer, located at St. Luke’s Episcopal Church in the city, is actually an alias for Laffite, who supposedly arrived in the state in 1839.

“The stories were there from the day he arrived,” Yarbrough said in an interview a few weeks ago, noting that the birth date for Ferrer lines up with the commonly accepted birth date for Laffite.

Visiting the gravesite is a sort of rite of passage for people in the area, according to Oliphant, who has written three other books.

“All the kids in Lincolnton go to the pirate grave,” she said. 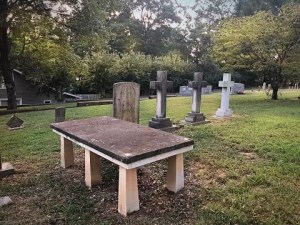 But just how did Laffite, who spent much of his life in New Orleans and the Caribbean and was suspected to have died in the 1820s, arrive in North Carolina and why was he using an assumed name?

These were just some of the questions in the book, published in mid-March, that were discussed Saturday.

Sponsored by the Stanly County Historical Society, the authors gave two presentations, each lasting about 45 minutes, followed by book signings.

“A lot of people bought books which I was very pleased about,” said Pat Bramlett, who helped organize the event.

After about two years of research, which took them across seven states, the duo wrote the book in about four months.

“We decided to base our entire project, not on hearsay or old newspapers, but on primary archival documents,” Oliphant said. 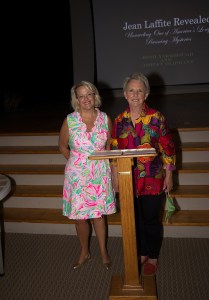 For most of her life, Oliphant has enjoyed pirates. She recalled that as early as kindergarten, she went to her local library to check out books on them.

Oliphant grew up reading about pirates like Blackbeard and Calico Jack, but as she got older, she gravitated towards Laffite, especially as she learned more about him.

After reading virtually every article and book she could find about Laffite, she decided to find out if the legend connecting him with her hometown had any basis in fact.

Oliphant traveled with her mother to New Orleans in 2018 to begin preliminary research about Laffite. While much of his early life is obscure, he is famous for setting up one of the most successful black market operations “the world has ever seen,” in the New Orleans area, according to Oliphant. (A small town in Louisiana is named after him.)

Commanding a group of around 1,000 pirates on the small island of Barataria, Laffite and business partner Pierre Laffite smuggled all kinds of goods, including slaves, throughout the Gulf of Mexico and New Orleans in the early 1800s. They also seized around 100 ships. (Oliphant disputes accounts that they were brothers.)

At the height of his smuggling success, Oliphant notes, Laffite was one of the 10 wealthiest men in America, impressive for a man born roughly half a century after the Golden Age of Piracy (1650s and 1730s) had ended.

“Laffite was a very strong personality,” Yarbrough said, noting he was charming but had a big ego.

He played a pivotal role in helping Gen. Andrew Jackson, the eventual seventh U.S. president, defend the city in the Battle of New Orleans during the War of 1812. With Jackson unprepared for the fight against the British, Laffite provided weapons and manpower that helped turn the tide.

“Many historians do suggest that his last minute offerings of those items made a difference in the battle,” Oliphant said.

When it came to Laffite, the mother-daughter team were most interested in his post-war life, especially the circumstances surrounding his death.

He eventually moved Galveston, Texas, before Laffite reportedly died sometime in the 1820s. There have been many theories as to his purported death — he died anywhere from 1822 to 1826, Oliphant said — though she and her mother were critical of them.

“A man can only die one time,” Oliphant recalled Yarbrough telling her during their time researching Laffite. “Maybe one of these is true, but what if none of them are?”

Their research revealed many things about the pirate, including that he faked his own death.

They discovered a non-digitized letter and logbook (belonging to Laffite’s lawyer) at Princeton University that proved Laffite was living in Cuba in 1829, well past the time when he supposedly had died.

The letter was sent to one of the pirate’s friends and referenced a man named “Maison Rouge.” Oliphant knew they were speaking in code about Laffite because while living in Galveston, the pirate lived in a colorful mansion that was known to many as Maison Rouge.

Oliphant and Yarbrough believe Laffite, who had many enemies, faked his own death as a way to get people off his trail. Always a colorful character, he had created numerous fake names for himself over the years, so a fake death wouldn’t be too surprising, they said.

An 1826 article from a Columbian newspaper reported Lafitte was mortally wounded as he attempted to overtake a ship. The story is suspicious, Oliphant said, especially since the only eyewitnesses were men on his own ship. Oliphant and her mom think Laffite had his men deliberately report that he died.

“He knew that the only way to permanently and finally evade all the various and sundry people who had a price on his head was to fake his death and start over,” Yarbrough said.

Making his way to North Carolina

Around 1830, Laffite returned to America, specifically to an area in Mississippi near Jackson, operating under the name Lorenzo Ferrer, according to records from the 1832 Copiah County Census. Land deeds showed Laffite became a land speculator and slave trader.

After moving north to Madison County, land records revealed a connection between Laffite and a group of brothers with the last name Henderson, Oliphant said. The pirate, still operating under the name Lorenzo Ferrer, traveled with them back to their hometown of Lincolnton in 1839.

Oliphant and her mother discovered Laffite’s existence in the city thanks to historical records shared with them by the Lincolnton Freemason organization, of which Laffite had been a founding member. They found his original petition asking to be part of the group along with his signature in the original ledger book. The Henderson brothers were also members of the organization.

“We read all of the minutes for all of the meetings connected to the time that Ferrer was in the Lodge,” Oliphant said.

Since he was also treasurer of the group, they found many of his hand-signed receipts.

He remained in the city until his death in 1875, at around age 96. During his roughly 35 years in the state, Yarbrough notes that he never worked a single day.

“He was just being a rich old Frenchman,” Oliphant said.

It was rumored that Laffite brought with him to North Carolina chests of gold. At the end of the Civil War, as the Union soldiers were descending upon Lincolnton, Laffite went to great lengths to hide his treasure.

“There’s a whole body of stories in Lincolnton about the day that Ferrer knew the Yankees were coming and he hired a team of horses and a wagon and asked for assistance from some able-bodied men to help move all of his chests into the basement of the courthouse for safekeeping so the Yankees wouldn’t get it,” Oliphant said.

One of the last pieces of the Laffite puzzle

Shortly after they finished their research on Laffite in summer 2019, Oliphant and Yarbrough received a call from a member of the Freemason Lodge #137 in Lincolnton saying there was something they needed to see.

The Lincolnton lodge, like the many others across the country, had a Tyler sword hanging on the wall. The Tyler, Oliphant said, is the name of a ceremonial position within the organization.

Spurred on by Oliphant’s persistence to learn about Laffite, the local Freemason members conducted some of their own research and discovered that the sword was actually a cavalry saber dating to the War of 1812. It was made by Nathan Starr, who produced armaments for the military, including during the Battle of New Orleans, which Laffite played a role in.

The discovery of a period sword excited Oliphant but also made her wonder about something: What if there was something, like a signature, etched onto the saber’s iron scabbard, possibly denoting ownership?

It was just a hunch, but Oliphant ran with it. She procured her husband’s blacklight and reached out to the Freemason members, who let Oliphant and her mom examine the weapon.

Inside the lodge, with the lights turned off and hearts pounding, they discovered a small inscription on the scabbard: Jn L. The two women nearly collapsed to the ground because they knew that was the precise way Laffite signed his name, so it couldn’t have been forged.

“Only a Laffite scholar would have known that Jean Laffite signed his name like that,” Yarbrough said.

The saber that originally belonged to Jean Laffite.

All this time, one of the biggest clues connecting Laffite to North Carolina had been hiding in plain site in her hometown for more than 100 years.

Wanting to get authentication about their presumed discovery, Oliphant and her mom found an expert in antique metals in Raleigh. He confirmed the inscription and said it was as old as the saber itself.

While they don’t believe Laffite personally fought in New Orleans, they think he simply liked the sword, wanted to keep it for himself and scratched his name on the scabbard. And since he had no children, donating the sword to the Freemasons was likely his way of ensuring part of his legacy would live on.

“We think he would be pretty pleased that two doggedly determined women, more than 100 years later, decided to take up the case and figure him out,” Oliphant said. “We had a good time doing it.”

The book is currently sold out on Amazon but can be purchased at alcottfarm.net.