SCS had lower teacher turnover than other districts, data shows

And it would appear that teachers enjoy working for the school system, because the percentage of turnover was much lower with SCS compared to other local school districts.

The only local school districts that had lower teacher turnover rates were Davidson, Lincoln and Cleveland, which were each below 9 percent. 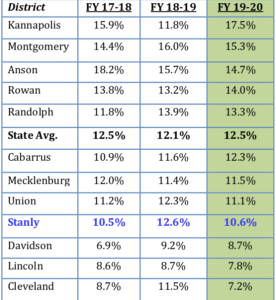 A chart created by County Manager Andy Lucas captures how SCS compares with other local school districts when it comes to turnover rates. Photo courtesy of Andy Lucas.

The report features specific “recoupment rate” data which is “the rate at which LEAs are able to attract transferring teachers to their system.”

Even though SCS lost 59 teachers, it was able to attract 27 new teachers for a recoupment rate of about 46 percent. That’s several percentage points higher than almost all of the neighboring school districts. Charlotte-Mecklenburg Schools, for instance, had a rate of 25 percent, while Rowan-Salisbury Schools was at 29 percent.

Additionally, of the teachers that left, only 3.6 percent relocated to another school district or charter school within the state (known as teacher mobility), which was lower than the state average of 4.9 percent and many of the local districts.

County Manager Andy Lucas, who has reviewed the data, said the low teacher turnover for SCS “just speaks to the fact that a lot of our teachers are homegrown…and they want to make a difference in their own communities.”

One possible explanation for the low turnover rate, Lucas estimates, is because many teachers “prefer to teach in a smaller rural school district than have to deal with some of the bureaucracy and issues that come along with teaching in the more urban districts around us.”

Digging deeper into the teacher turnover data, of the 59 teachers who left, 46 percent did so for personal reasons, while 39 percent left for reasons beyond the control of SCS. Only 5 percent of teacher departures were initiated by the school system (this includes individuals who were non-renewed, dismissed or resigned in lieu of dismissal) while the remaining 10 percent left for other reasons.

The lowest teacher turnover rate for SCS in the last decade occurred in 2010-2011, when only 6.3 percent of teachers left.

For the 2019-20 school year, the overall state attrition rate remained at 7.5 percent, with 7,111 teachers having quit or retired.

The annual statewide teacher turnover and vacancy report is completed annually in mid-February by the NC Department of Public Instruction.