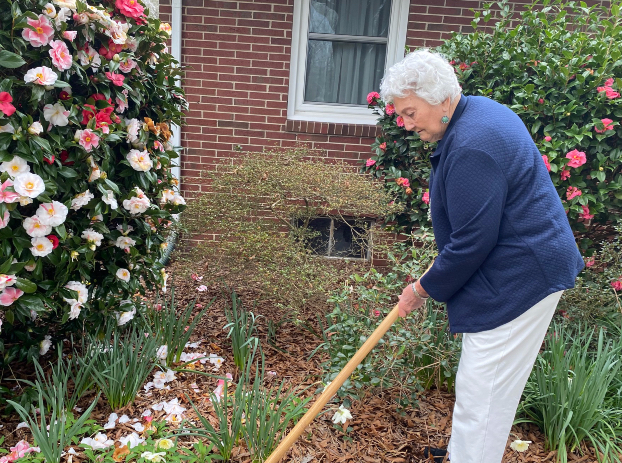 Peggy Burris spends up to four hours each day tending to her garden.

Peggy Burris of Albemarle is a great example of the old adage that age is just a number.

Even at 91, Burris leads an active and independent life: She still drives and is a voracious reader (she’s almost finished re-reading the Bible). She regularly attended a bridge club and retired teachers meetings — as she and two of her daughters are Alpha Delta Kappa honorary teachers sorority members, before the COVID-19 pandemic. Up until a few years ago she was a Sunday school teacher at Pleasant Grove Baptist Church.

But what brings her the most joy is going outside and tending to her many plants and trees. While she has people that help with mowing, Burris estimates she spends up to four hours a day working in her garden. And her front and back yards burst with all kinds of bright colors — the yellows of the daylilies, the red and whites of the camellias and the pinks of her cherry tree. 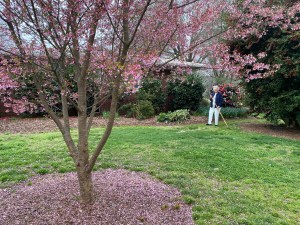 Peggy Burris and her colorful garden.

She orders most of her plants from the mail order gardening company Breck’s.

“There’s something blooming in her yard all the time,” said daughter Pam Medlin, who lives right across the street from her mother on St. Martin Road in Albemarle.

“Her yard absolutely looks like something out of Southern Living magazine,” said Rita Griffin, another daughter. “It is so beautiful.”

While Burris says she likes getting her hands dirty, her favorite part about gardening is seeing the flowers bloom.

“It’s just amazing what they do for my spirit,” Burris said about her plants. “They’re just so uplifting.”

Throughout the year, Medlin helps her mom grow all kinds of crops in Burris’ backyard, including tomatoes, green beans, peppers, cucumbers, squash, okra and zucchini, which she uses in an assortment of soups and other meals. Burris has two freezers in her basement full of canned vegetables.

“If there’s ever a real emergency, we could all come and live in her basement and eat forever,” Medlin joked. 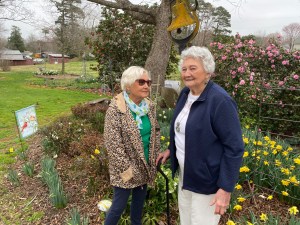 Originally from Union County, Burris moved with her family to Stanly County when she was 4. She graduated from the old Endy School before getting her teaching degree at Pfeiffer College. Burris spent more than 30 years teaching at Oakboro Elementary School before retiring in 1991.

She married Joe Burris and the couple had three daughters: Medlin, Griffin and Marilyn Hatley. The two oldest were teachers like their mother while Hatley is currently the mayor of North Myrtle Beach.

During the past year, due to her age and the fact that she has a heart condition, Burris has largely avoided going to church and other public places, which has allowed her more time to devote to her garden.

She also enjoys interacting with her family, which has been vaccinated. Burris, Medlin, Griffin and her husband Don eat together twice a week and they’ve learned to play the game Mexican Train. Many of Burris’ four grandchildren, six great-grandchildren and four great-great-grandchildren have also come by to see her.

When asked about the secret for a long and healthy life, Burris had a quick answer: “Just being active.”