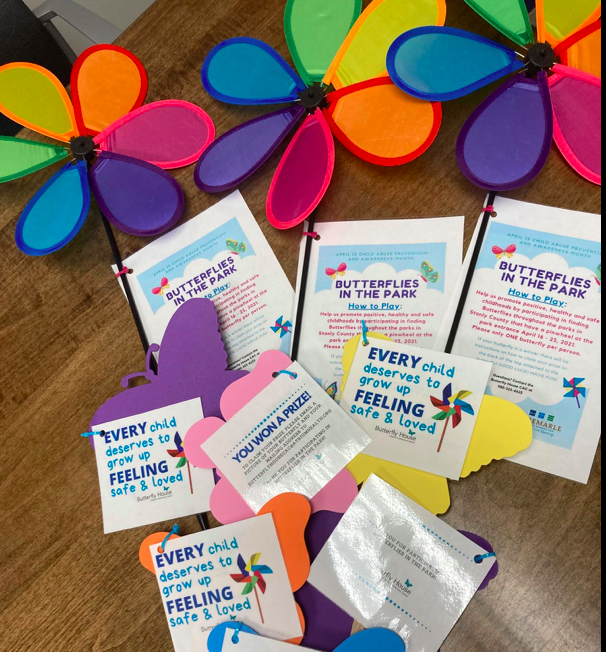 With April being National Child Abuse Prevention Month, the Butterfly House Children’s Advocacy Center had to get creative with how to spread awareness.

Due to the COVID-19 pandemic, the organization — which is part of Atrium Health Stanly and  — had to scrap some of its usual outreach efforts this month, including its annual awareness breakfast and the Walk Away Abuse event at the YMCA Pavilion.

But the Butterfly House, which provides evaluation and supportive services for victims of child maltreatment, including neglect, sexual and physical abuse, has still found a way to get the word out to the community. Through its Butterflies In The Park initiative, a number of brightly colored butterflies will be hidden throughout parks in the county that are designated with a pinwheel at the entrances.

April 16-23, anyone who finds a butterfly will be able to claim a prize (instructions will be on the back of the tag attached to each creature). Prizes include ice cream, kayak rentals and boat passes for Morrow Mountain.

“It get families in the parks together looking for the butterflies,” said Amy Yow, director of the organization which also serves Anson, Montgomery and Richmond counties.

Drawing awareness about the issue is key for organizations like the Butterfly House because in the U.S., one in four girls and one in six boys will experience some form of sexual violence by the time they turn 18, Yow said.

According to the Prevent Child Abuse North Carolina, the theme for this year’s month is: “You can be a connection for children in your community!” North Carolina’s Statewide Child Abuse Prevention Month 2021 activities will take place online and can be found here.

One of the biggest difficulties over the past year in dealing with the pandemic has been the limited face-to-face interaction between school personnel and students.

This lack of access to students resulted in a decrease in the number of reports of child abuse and neglect sent to the county’s social services department.

As of March of this fiscal year (which began last July), the department has received 566 reports of neglect and abuse from its reporters, the majority of whom are school officials, down from the 736 reports it received at the same time last year, according to data from DSS director Dolly Clayton.

While the department’s number of child abuse reports vary from year to year, Clayton said she’s not concerned about the current volume “because we continue to get reports from appropriate sources.”

“We believe that Stanly County residents are aware of the process for making a child protective services report, and do so when they have concerns regarding children’s safety and well-being,” Clayton added.

While it’s still too early to assess the pandemic’s impact on child abuse rates in Stanly County, which are tracked by the state and tend to be a year behind, the county seems to have gotten worse in recent years. For children assessed for abuse or neglect in 2019, Stanly’s rate of 65.7 per 1,000 children was higher than the state’s rate of 51.5 and the county’s 2018 rate of 58.1, according to data from the nonprofit organization NC Child.

The data also showed that 48 percent of children in the county lived in poor or low-income homes in 2019, slightly higher than the statewide total of 45 percent.

From dealing with unemployment, the constant fear of getting sick or losing a loved one and the struggles to complete basic school work from home, the pandemic has caused a multitude of mental and physical burdens on families, especially parents.

“You have all these increased stressors, which can potentially lead to forms of abuse and neglect,” Yow said. “I’m not saying that it will, but it definitely can.”

That’s why events like Butterflies In The Park and Dancing With the Stars, which will occur in September after being canceled last year, are so important.

“If we have them (children) out in the parks with their families, hopefully it’s going to release some positive endorphins of good feelings.”