PEEKING INTO THE PAST – Whitlock and Lowder 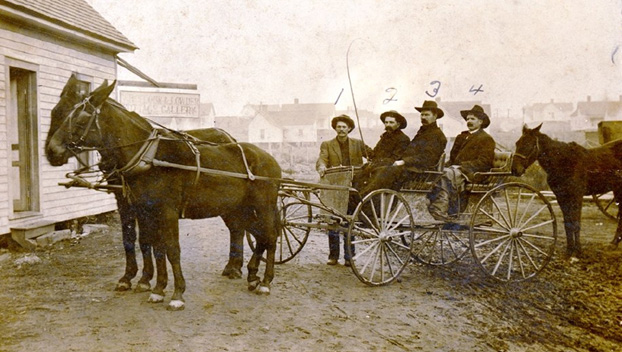 Today’s photo, dated November 1908, is believed to show a mule drawn “taxi” that operated between Albemarle and Salisbury. The men, left to right, are Walter Whitley, James A. Harward, J.M. Jordan and Thomas Efird. The sign, behind the mules, reads “Whitlock and Lowder, Cottage Gallery.”

During 1901, M.A. Whitlock and A.A. Lowder opened Whitlock and Lowder, a general merchandise store and photography business, on Wiscassett Hill.

According to the Oct. 7, 1909 Stanly Enterprise, the business moved to its “present location” in 1907 to increase the area they could cover. This new location was said to be “on the west side of the Winston-Salem Southbound Railroad tracks on what is now Salisbury Avenue.”

In early 1931, Whitlock retired from the business due to failing health and he passed away on July 28 of that year. Lowder stayed with the business and renamed it “A.A. Lowder and Sons.” This business was not found in the 1937 city directory, so its fate isn’t known. Lowder passed away Sept. 12, 1939.