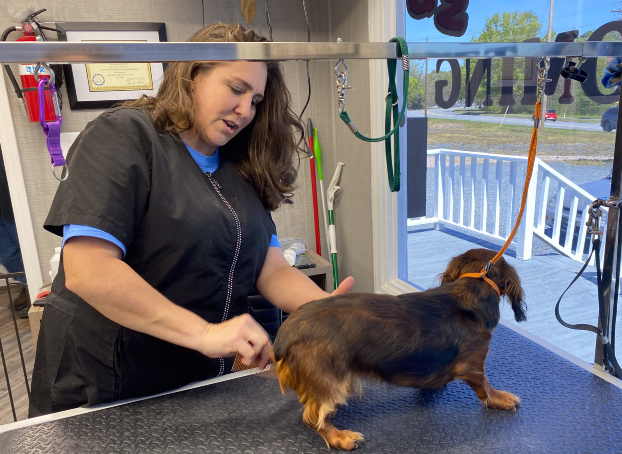 Debra and Richard Odom have owned numerous companies over the years, ranging from internet advertising and web hosting to, most recently, Tillery Powersports in Albemarle, a motorsport vehicle business where they rent U-hauls and sold ATVs.

But last year threw the couple for a loop.

As the COVID-19 pandemic first hit in the spring, the Albemarle couple was getting U-Haul trucks from many of the major hotspots in the country at the time, including New York and Florida. Out of safety concerns (and also because they were no longer receiving ATVs from China), they decided to shut down the business.

“It was getting too dangerous,” Debra said. “We were scared of the virus and at that point no would knew what the virus was going to do.”

With no income to draw upon, the Odoms had to reinvent themselves.

Inspired by her love for dogs (the family has seven at home: five Great Danes and two Yorkshire Terriers), Debra pivoted and enrolled in pet grooming school.

She had gone to cosmetology school after high school but never got her degree, which she regretted.

“That’s always been something I kind of wanted to do, but since I was older, I figured I didn’t really have the time to do that, so I went to the next best thing,” she said, “which is dogs.”

So for three months, Debra traveled an hour and a half each day to South Charlotte Dog Grooming School in Waxhaw. While she was in school, Richard remodeled and upfitted their Tillery Powersports location (617 U.S. Highway 52 in Albemarle near Pizza Hut) to prepare for the new business.

“We knew the whole time I was in school that the whole idea was for us to use this building,” she said about the former Tillery Powersports location.

Once Debra finished in November, she spent a month interning at the school before she and Richard opened Dippin’ Dogs Pet Grooming on Dec. 18. They offer a range of services, including bathing, hair cutting, deshedding, nail polishing and teeth brushing. 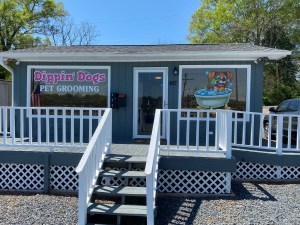 If the name reminds you of a certain ice cream brand, that was intentional. After going back-and-forth debating numerous names for the business (they wanted a distinctive one to separate them from other pet grooming businesses), she decided on a playful variation of Dippin’ Dots ice cream.

“My daughter who is 8, once she heard that name, she wouldn’t let me choose any other name,” Debra said. “She loved it.”

Since opening, Dippin’ Dogs has been extremely busy.

“We have most days more than we can handle,” Debra said, noting that they are currently booked through May 5.

While most of their clientele is based in Stanly County, they had customers from other areas including Mount Gilead and Wadesboro.

As of now, the business is just the two of them. Richard helps with bathing and is filling in until Debra can hire another experienced dog groomer.

One of the things that sets Dippin’ Dogs apart from other groomers is that they groom all breeds of dogs.

“Some groomers prefer to only groom small dogs, but we take them all,” Debra said.

After many months of uncertainty last year, they are appreciative to be working again — especially in a profession they care so much about.

“This is the most rewarding job I’ve ever had, by far,” Debra said. “I cannot describe the feeling that you get knowing that you’ve satisfied someone.”

Debra notes that, for her, it’s been very therapeutic to work each day with dogs.

“Dogs don’t discriminate, they love you no matter what,” she said. 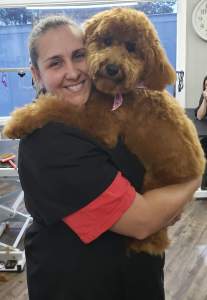