Norwood resident has a passion for picking up trash, helping his community 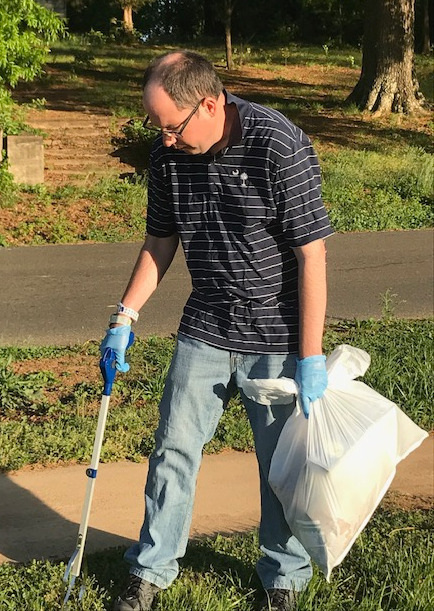 Though Norwood native Josh Walker lives with autism, it doesn’t define him or keep him from helping out his community — especially when it comes to advocating for the environment.

As a member of the community group Keep Stanly Beautiful, Walker, 39, is passionate about environmental issues, which he says dates back to reading “An Inconvenient Truth” by climate activist and former Vice President Al Gore.

What he enjoys most is picking up litter and trash.

Armed with a 13-gallon bag, tongs and gloves, Walker travels around the county going to places such as parks and the Walmart parking lot, picking up trash to do his part to make Stanly a cleaner place.

Even when Walker and his mother head to the beach, she said, he’ll bring all his necessary gear to pick up any trash he finds.

“It really is a passion,” said his mother Anna Walker. “It doesn’t matter where we are, even if he’s on vacation, he has his gloves and his bucket and his tongs.”

Walker is so devoted to ensuring a cleaner environment, that his mother occasionally has to hold him back in certain situations.

“We’ll be going down the interstate and he’ll say ‘That trash is awful’ and I’ll say, ‘Well that we’ve got to let go,’ ” she said.

As an avid fan of politics, who often emails legislators regarding topics that interest him, Walker said he likes picking up trash because he sees it as a bipartisan issue.

“If everyone does their part, regardless of party, they can make a difference,” he said.

In addition to his environmental advocacy, Walker has taken on a leadership role in the county, as he co-founded and was the first president of the Stanly County Joy Civitan Club, an offshoot of Civitan International. The club was created as a way for adults with developmental disabilities to come together to socialize and enjoy each other’s fellowship. They met once a month before the pandemic hit last year; Walker hopes to continue the club once the pandemic ends. 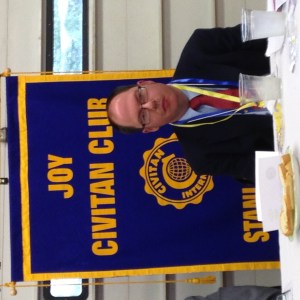 Josh Walker was the first president of the Joy Civitan Club of Stanly County. Photo courtesy of Chrissy Walker.

In the past, Walker worked at Oakboro Nursery tending plants and also volunteered at the Stanly Community Christian Ministry’s Community Table food pantry in Norwood.

In order to inspire others to follow his example and pick up trash, Walker spoke before the Norwood City Council last November, asking to adopt a street.

“He wanted this more than anything else in the world and he was able to convince the town council,” Anna Walker said, noting that no one had ever went before the council wanting to adopt a street.

Walker speaking before the council “affected several people,” Town Administrator Scott Howard said, because “it was such a pure, selfless act and it was so refreshing.”

Individuals or groups who participate in the town’s Adopt-A-Street program are required to remove trash/debris from both sides of the adopted street for a two-year period, which translates into a minimum of four clean-ups per year.

The requirements have not been a problem for Walker. His mother said he meets the yearly requirements in a given month. Every time he attends to Turner Street, which is usually at least once a week, he picks up “a whole bucketful of trash,” his mom said.

“It really is an obsession with him,” in terms of picking up trash, “and it’s worked out perfectly with the Adopt-A-Street program,” his mom said.

Littering has been a recurring problem in Stanly to the point where volunteers with Keep Stanly Beautiful addressed the issue before Albemarle City Council a few months ago, encouraging people to step up when it comes to picking up trash around the county.

In recent months, “trash has gotten much, much worse” in the city, KSB president Lee Snuggs told city council Feb. 15. “We’re just inundated and we can’t handle it.”

In order to better address the problem, the city partnered with KSB to develop a comprehensive plan to clean up the city. As part of NCDOT’s Litter Sweep campaign, KSB and other members of the community have been picking up trash along several of the dirtiest roads in the county Saturday mornings this month.

To help the alleviate the trash problem, Walker encourages people to be more proactive in cleaning up the county. He doesn’t take offense or blame people for littering.

While working to clean the county will not necessarily change the world, Walker believes every small act matters.

When people are trying to affect genuine positive change in a community, “the small things can make a difference in the bigger picture,” he said.