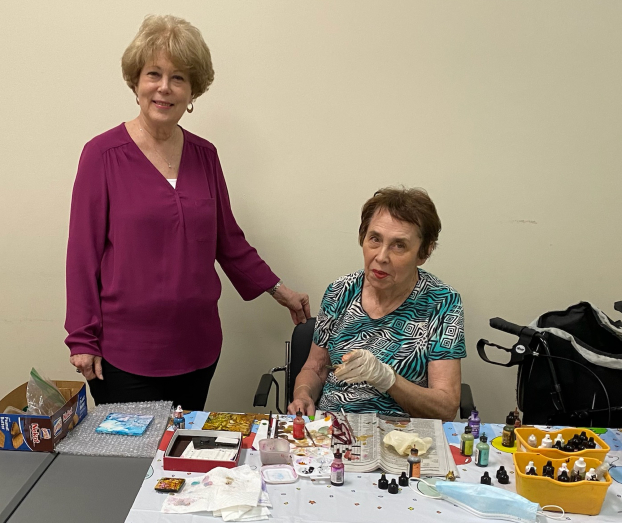 Becky Weemhoff chats with Anita Ammerman. Weemhoff will retire as director of the Senior Center at the end of the week. Photo courtesy of Becky Weemhoff.

After more than 30 years working in the senior services department, including 18 as director of the Senior Center, Becky Weemhoff is retiring.

Her final day will be Friday.

She had been mulling retirement for the past year, but ultimately made the decision to spend more time with her family and friends, especially her two grandchildren in Charlotte.

“I’ve had a job that has certainly enriched my life because of the people I’ve gotten to know,” she said.

Her fondest memories, she said, have been meeting and befriending so many seniors over the years.

“She’s done some wonderful things for the seniors of our community and I know they appreciate it,” County Manager Andy Lucas said. “You’re not going to find somebody that’s going to have a bad word to say about Becky.”

Originally from Iredell County, Weemhoff has lived in Stanly since 1983. She initially worked as a nutrition supervisor, where she oversaw the congregate meal program and started the home delivery meal program. She became director of the Senior Center in 2003.

During her tenure as director, the activities and programs offered at the Center have increased as the county’s senior population has continued to grow. To account for the rising population in western Stanly, Weemhoff played an instrumental role in the 2018 opening of the Senior Center’s satellite location in Locust.

With the help of the Friends of the Senior Center, there have also been many renovations to sections of the building, including the library and kitchen, during her time as director.

Thought not yet finished, Weemhoff has been busy working to create an outdoor environment at the Senior Center, complete with picnic tables and a patio. The Senior Center is also working to install touchless sliding front doors “in our effort to keep senior adults as safe as possible,” she said.

Weemhoff is quick to point out that no project or renovation to improve the senior services department could have happened without the help of so many other dedicated people.

“During my time working at Senior Services many of the things that were accomplished could not have happened without a great staff, wonderful Advisory Board and Friends of the Senior Center Boards, and a supportive county manager and commissioners,” she said.

Weemhoff is looking forward to seeing what life is like during the day when she’s not busy running operations at the Center.

“I can’t even tell you what morning TV shows come on,” she joked.

But her legacy of helping seniors in the county will not soon be forgotten.

“She loves to go above and beyond in helping people,” said Sharon Greene, who works at the Senior Center. “This goes not only for each and every client, but also for her staff as well. She will always be remembered for her caring and thoughtful ways.”

A drop-in retirement party for Weemhoff will be 2-4 p.m. Friday at the Senior Center in Albemarle.

For Contina Salyer, fulfilling a childhood dream of getting slimed was well worth it. Salyer, the Scoutmaster for Girl Scouts... read more