Several new businesses are expected to move into the vacant properties along South 2nd Street in the coming months.

If anyone has driven past South Second Street in downtown Albemarle recently, they’ve probably noticed several vacant buildings across from the courthouse.

But the properties, which are owned by E.H. King Heirs, LLC, will not stay empty for long.

Over the next few months, four new tenants will be moving into the spaces, according to Lee Allen, broker and owner of Re/Max Town and Country in Albemarle, who took over management of the buildings in January. They include a tomahawk-throwing business, a wine store and a medical office supply store. He didn’t have any information about the fourth business. The new tenants have already signed letter of intent forms and leases are being drawn up.

The King family is investing more than $100,000 to help renovate the buildings in a build-to-suit process, where each property will be designed specifically to meet the new tenants’ needs.

Concord-based architect Allen McGuire is going through and evaluating the spaces, noting anything that needs to be done to fit the tenant’s needs, Allen said.

The new businesses will bring more of an “entertainment vibe” to the area, Allen said, noting that he thinks the section of downtown will be similar to vibrant parts of downtown Concord, Salisbury and Mooresville.

“That’s sort of the inspiration right now for the buildings along South Second Street,” he said.

These businesses, he said, will also appeal to the many young people enrolled in Pfeiffer University’s new Health Science Center, located about half a mile away. The university estimates it will have 237 students by spring of 2023, according to remarks President Scott Bullard made during a presentation about downtown Albemarle in February.

“The Pfeiffer effect is creating a lot of enthusiasm downtown for people that want to open new business or maybe expand existing business,” said Mayor Ronnie Michael, adding that property owners willing to enhance and improve the old buildings is a “key for us moving forward.”

One of the new tenants is Garrett Starnes, who is aiming to open his business, The Tomahawk Throwing Range & Blade Shop, at 130 S.Second St., sometime in June. Patrons will be able to drink cans of beer and safely throw tomahawks, said Starnes, who has lived in downtown since 2017. 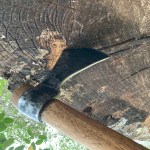 As opposed to the many axe-throwing businesses in the region, Starnes’ will feature people throwing tomahawks. Photo courtesy of Garrett Starnes.

There will be 10 throwing lanes, with chain link fencing in between each for added protection.

“I went above and beyond for safety (compared to) what I’ve seen at other ranges,” Starnes said.

Starnes is excited to help rejuvenate a downtown that he admits doesn’t have much of an active nightlife.

“We love it, but there’s not really not much to do,” he said.

The previous tenants were paying substandard rent and the buildings were in bad shape, Allen said. He noted that in the past, many of them didn’t even have leases.

Allen said he did his best to try and work with the tenants to agree on fair rent increases, but they couldn’t come to a mutual understanding. Almost all the tenants are now gone.

Two of them, Will’s Place and Second Street Gallery, recently relocated to other parts of the city, while Kat’s Meow closed shop. Allen reached out to the other tenant, Dent Turner, a land surveyor, but hasn’t heard anything.

The only tenant that hasn’t left is Shawn Oke, who owns the Albemarle Sweet Shop. He recently signed a two-year lease, Allen said.

The King family felt the need to renovate and update the properties after one of their buildings — the Charles Parnell law office — caught fire last year.

“The Kings came down, saw the condition of their spaces and started saying, ‘We’ve got to fix this,’ ” Allen said, noting this also occurred around the same time the city implemented its new commercial maintenance code.

With the new code, “we expect them (the city) to start coming down on folks that don’t maintain buildings,” he said.

He compared the updates to the recent renovation of Off The Square restaurant, also located on Second Street though not managed by Allen.

“If anyone’s ever been in Off The Square and they just love that vibe and that feel, that’s the same type vibe and feel you’re going to see in all of those buildings.”