Stanly holds first career fair in more than a year 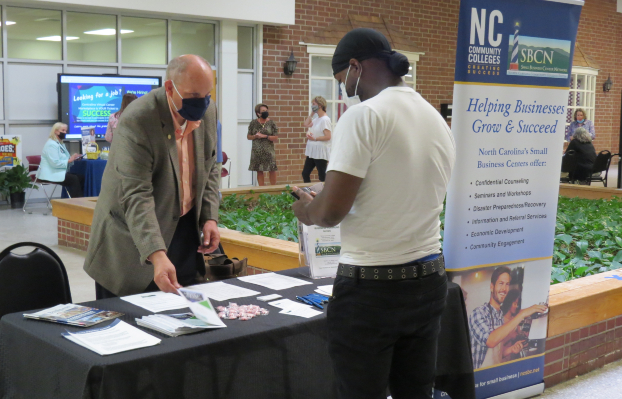 Roughly 30 companies from the area took part in a career fair Tuesday at the Stanly County Commons organized.

In attendance were a host of companies and organizations spanning from from health care (Atrium, Monarch, Taylor House) to public service (Albemarle Fire, Stanly EMS) to manufacturing (Fiberon) to the food industry (East Coast Wings and Grill, Smithfield).

Many prospective employees equipped with resumes completed job applications and networked with a variety of professionals.

It was the county’s first career fair in more than a year, said Gus Vanegas, head of NCWorks Career Center, which sponsored the event along with Stanly Chamber of Commerce, Stanly County government, Centralina Workforce Development Board and Stanly Community College.

As people continue to get vaccinated each week, Vanegas said people are feeling more comfortable about meeting in-person with employers.

There is some hope among many businesses that the worst of the pandemic is in the rear window and that, as cases continue to decline and more people get inoculated, a sense of normalcy can slowly start to come back.

“There is a sense of optimism about, ‘Okay we’ve survived this, now we’re ready to expand,’ ” said Reese Linnell, director of the community college’s Small Business Center, noting he’s seen a significant uptick in the number of people he’s spoken with about job prospects since last fall.

Many of the businesses at the career fair noted that while the past year had been a struggle, they were looking forward to expanding their workforce.

“It’s been a challenge just like everywhere else, but we’re grateful to have employees still that are dedicated and loyal,” said Adrian Magana, general manager of East Coast Wings and Grill in Albemarle.

While the restaurant briefly had to furlough some employees at the beginning of the pandemic last spring, it was able to bring them back a few months later.

Though East Coast had to tweak its hours of operation last year, with restaurants currently able to operate at 75 percent capacity for indoor dining, Magana said that for the most part business has gotten back to normal.

Throughout the past year, All Ways Caring HomeCare, which has a location in Albemarle, avoided furloughs and was able to retain its staff, said human resources rep Carol Wright.

She currently has 21 caregivers in Stanly County, but she needs about 40.

“Our workers are small-town solid,” she said. “They don’t make a lot of money, but they care about people.”

Lindy Myers, who works in human resources at Trinity Place, said that while “there was very little turnover” over the past year, the senior living community is looking for a few additional clinical and dietary staff members. She said that for whatever reason, it has become harder to find new employees to replace those that have recently left.

Several businesses that were at the career fair are still struggling with not just attracting new workers but keeping the ones they have.

Misty Rabon, regional manager with Ally Home Care, said that the pandemic has not been as detrimental to health care companies like her own as unemployment benefits.

“People don’t want to work if they’re getting paid unemployment,” she said, noting that has been the case with several Ally Home Care employees.

While some employees stopped working last year, it has mainly been an issue this year.

“I had more employees during the worst of the pandemic than I do now,” she said.

Elizabeth Almond, a supervisor with Exact Staff who staffs for Electronic Recyclers International in Badin, said before the pandemic, the company was doing well but had to lay off much of the workforce last spring.

Almond estimates she had 30 people working at ERI through her business last year before the pandemic; she now said she probably has around six.