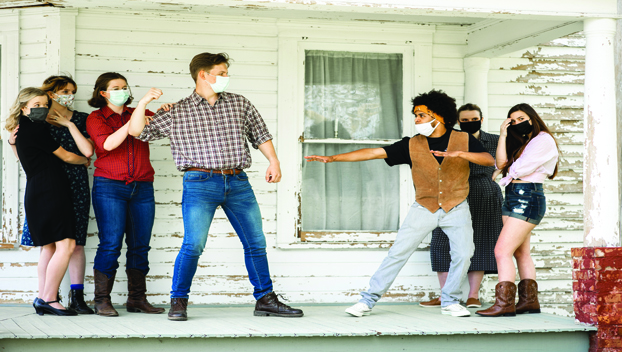 The West Stanly Players are happy to announce their return to the stage after missing the 2020 spring and fall productions due to Covid-19. The return is just in time to celebrate 50 years on stage.

To celebrate this milestone the Players will present the comedy classic “Daddy’s Dyin’, Who’s Got the Will,” first presented at WSHS in 1991.

“We are very excited not only to be returning to the stage, but to also pay tribute to an audience favorite from the past,” says WSP director Wes Tucker. “It is especially meaningful for me because this is the same show I starred in 30 years ago when I was a student at WSHS.”

The West Stanly Players were founded in 1970 by James D. Kennedy, who directed the Players from 1970 until his retirement in 1997, when Tucker took his place in the directing chair.

This comedy follows the Turnover family of Lowake, Texas. The family has returned home to try to settle their dying father’s affairs and to attempt to mend old wounds. The problem is, he has misplaced his will
and the children are in a frenzy to find it, while constantly bickering about who wronged whom in the past.

The production features a host of actors, both veterans and newcomers to the WSP stage. Senior Cat Laws leads the ensemble cast as the spinsterish Sara Lee. She is joined by her good for nothing brother, Orville (senior Toby Troxler) and his diet obsessed wife Marlene (senior Shayla Grismer); their sister, country singer wannabe Evalita (senior Shelby Hinson) and her hippie boyfriend Harmony (senior Jamison Hilliard); and the estranged oldest sister and preacher’s wife Lurlene (junior Sophie Tucker). Capping off the cast is the sharp-tongued grandmother, Mama Wheelis (senior Baylee Woodall) and the loving but often confused daddy, Buford (junior Eli Smith).

“During Covid-19 we have all had to spend maybe a little too much time with our families, and although we love them, we have found out they often may drive us crazy,” Tucker said. “ ‘Daddy’s Dyin’ ’ gives us the chance to laugh at someone else’s family as they struggle to keep the peace.”

Although the show will go on, the Players have put in safety measures to keep the audience and actors safe. Masks will be worn and to help with social distancing, every other row will be blocked off. This will keep audience members six feet apart as well as reduce the theatre to 50 percent occupancy.