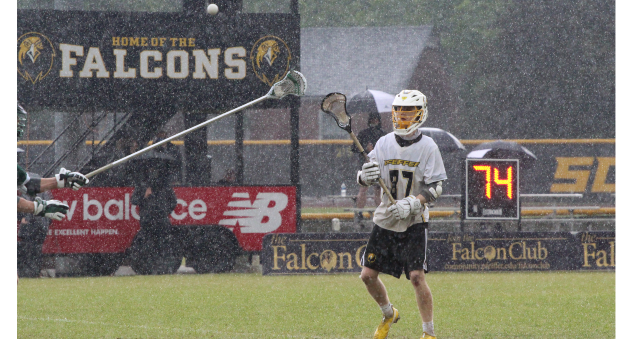 Pfeiffer jumped up 2-0 on a pair of Quinn Becraft goals, both assisted by senior Jared Nelson. Both goals came in the first 1:26 of the first quarter.

Greensboro then scored three straight to take the 3-2 lead at the end of the first quarter. Austin Abourjilie scored on a man-up opportunity for The Pride followed by goals from Dominic Scali and William Beyer.

Greensboro went up 4-2 when Spencer Kontoulas scored at 12:18 of the second quarter. Pfeiffer then put three consecutive goals together to surge ahead 5-4. A man-up goal from John Allen followed by a Jacob Leone goal at 8:27 tied the game at 4-4. The tying goal from Leone would be assisted by Nelson, which broke the NCAA All-Time Career Assists record, a record of 287 that was set in 1974 by Rick Gilbert of Hobart College.

Nelson then got into the scoring column, taking a pass from Corey Choberka to put Pfeiffer up 5-4 at 7:45.

Greensboro would grab the momentum heading into halftime when Abourjilie tied the game at 5-5 with an athletic goal with two seconds remaining in the half.

Tied at 7-7 in the third, Pfeiffer put together a pair of goals from Choberka and Leone to take the 9-7 lead into the final quarter.

In the fourth, Pfeiffer went up 10-7 on a Choberka goal at 14:10 and following a Greensboro goal, Pfeiffer got three straight goals when Becraft sandwiched a pair of man-up goals around a Treven King score to give Pfeiffer the 13-8 lead.

Greensboro made it interested in the waning minutes, putting together a three-goal stretch of its own, but were unable to get within two goals, as Pfeiffer won its first USA South East Division title with the 13-11 win.

Pfeiffer will return to Lefko Field on Saturday when it hosts Piedmont College for the USA South Conference Title and the automatic bid to the NCAA Division III Tournament.