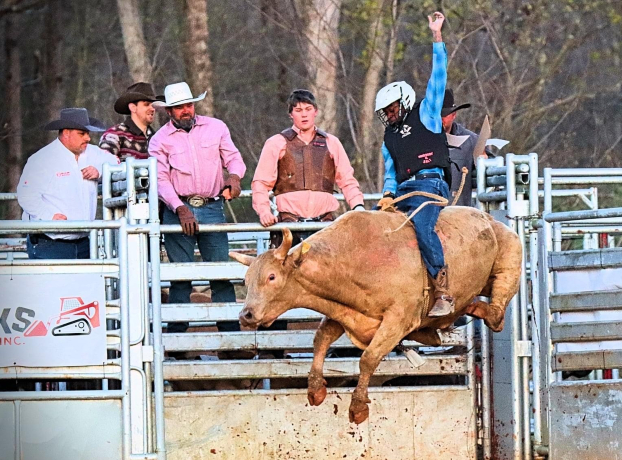 A bull rider during an April event hosted by A & J Rodeo Company. Photo courtesy of Paul Anastasiadis.

Country singer Randy Travis and his brother Ricky Traywick will perform Friday and Saturday night at the Stanly County Fairgrounds as part of a bull riding event, Bulls and Barrels, organized by A & J Rodeo Company based in Mt. Pleasant.

“I think it’s going to be a great turnout,” said Paul Anastasiadis, owner of A & J, which hosts about 35 events annually. A professional bull rider, Anastasiadis rode with the Professional Bull Riders organization for more than 20 years before retiring in 2016, according to his website.

There will be at least 50 to 60 live bulls for the barrel races, Anastasiadis said, noting the Fairgrounds, at 24302 U.S. Highway 52 Business S., hasn’t hosted a bull riding event since the early ’90s. Winners of the races will receive belt buckles.

There will also be a mechanical bull, thanks to P & B Mechanical Bulls, which has settings ranging from first-time riders to the most experienced riders. It costs $5 per person.

Randy and Ricky, who were born in Marshville in Union County, will perform a mini-concert during intermission of the bull riding races, Anastasiadis said, noting it will last about 30 minutes. Former “American Idol” contestant Misty Bennett will sing the National Anthem, Anastasiadis said.

The event will begin both days at 7 p.m. and last until around 9:30 p.m. Food will be provided by American Legion Post 76 and there will be merchandise vendors.

If anyone wants to take part in the bull riding events, they can contact Anastasiadis at 980-248-3636. It costs $55 for open and amateur bull riding, $45 for barrel and mini-bull races and and $15 for sheep races.

Anastasiadis said that he is planning on hosting a Bull Bash in Stanly County on June 12, where he hopes to bring in “American Idol” Season 10 winner Scotty McCreery.