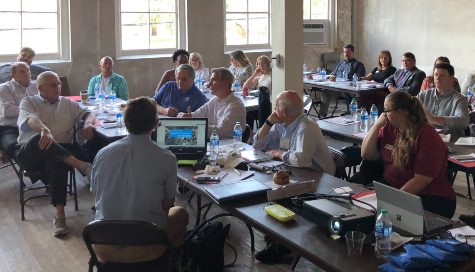 When driving south along U.S. Highway 52, what’s the first obvious sign or landmark telling you that you’ve arrived in Norwood?

That was one of the many questions asked during a two-day workshop Thursday and Friday aimed at creating a framework to help transform Norwood from a small tourist town into a revitalized destination hub.

More than 30 town leaders, residents and county and state officials attended the event hosted by Construction Professionals Network Institute, a nonprofit group that works with small towns across the state.

CPNI, which has hosted workshops in small towns over the years such as Mt. Gilead, Elkin and Robbins, noted that the attendance for this event was the biggest it had seen.

The workshop, which was on the second floor of the 110 Mercantile Building and was no cost to the town, follows more than a year of planning within the town to create a resurgent and revitalized Main Street.

Several new businesses have recently opened while others, including a sushi restaurant, are planning to in the coming months. Juneberry Ridge Farm has also been working on expanding its influence within the community.

There’s even a plan to reopen Nick’s, the landmark restaurant along Lake Tillery, sometime later this year.

Much of the discussion focused on identifying issues with the town and how it could be addressed and improved upon. These included the many unoccupied, dilapidated buildings, unreliable broadband internet and not enough restaurants and retail to draw visitors to the town — especially families who have properties along Lake Tillery.

Many of the property owners of the abandoned buildings, possibly for sentimental reasons, have been unwilling to sell them, which has limited any possible economic development.

“We don’t have to be a huge town in order to be a thriving town,” said Amanda Vigneaud, owner of Reservoir Coffee, noting that the town could benefit from “a great narrative” that would bring people to the area.

While Norwood is known as the “Gateway to Lake Tillery,” many people said the town doesn’t have a unique and vibrant business environment encouraging people to eat and shop while at the lake.

And access to Tillery isn’t easy for people who don’t own lakeside property.

“It’s the gateway to Tillery, but when you get here you can’t get to the lake,” said Roger Dick, CEO of Uwharrie Bank.

Residents mentioned that finding ways to better advertise events — like the farmers market, livestock market and Winter Wonderland — would help with establishing a more defined brand for the town.

Many of Norwood’s strengths that residents spoke about included plentiful farmland, strong schools and a close-knit community where people know and love each other.

Aside from noticeable landmarks, like the new fire department, town hall and Atrium Health facility, the town has several hidden gems that, if rehabilitated and improved upon, could provide space for businesses and local artisans, CPNI staff said.

These potential assets include the old Collins and Aikman warehouse across from Darrell Almond Community Park and the brick building connected to the town’s museum on Campbell Street across from Reservoir Coffee.

Street art portraits could be painted on unoccupied buildings to help spruce up parts of the town, CPNI members said.

“From a town’s perspective (the investment) is relatively small, but from a small business owner’s perspective, it’s enormous and can make all the difference,” Linnell said.

The tension for many people in Norwood seems to center around wanting to grow while simultaneously not wanting to lose the quaint, small-town charm and appeal.

“Change is inevitable,” said Doug Burns, a CPNI member, “but how that change is controlled and planned around is absolutely the most important thing.”

Even in the middle of change, Clement Vigneaud mentioned that in wanting to stay small and authentic, the town seems like it wants to retain certain aspects of an identity, or soul, that it’s still working to fully flesh out and define.

Ideas that were discussed to help the town prepare for growth included creating a comprehensive master plan and a land-use plan detailing how properties are specifically zoned in the town. There was also talk about possibly creating a public beach or marina and lodging options to allow visitors easy access to the lake.

Throughout the two days, officials with NCGrowth, a research institute based at UNC Chapel Hill, took notes regarding what was said about the town. They will create a final report comprised of Norwood’s demographic and economic data, summaries of key items that were discussed, including common themes, and recommendations/projects for the town moving forward.

The goal is to finalize the report within the next month before presenting it to Scott Howard and the town council. Officials with CPNI would then check back with the town in six months and then a year to see how it has been implementing the recommendations.

Several CPNI members spoke about prioritizing certain projects in order to not get too overwhelmed or distracted and starting with the “low hanging fruit” that could be implemented now. They also talked about creating committees and establishing contact people to be in charge of the projects.

“We’re going to look at the community from 40,000 feet and then what we try to do, from what we learned, is we’ll try to hone in on suggestions that are in the grass,” Burns told The Stanly News & Press after the workshop, noting that the final report will serve as a “living document” that can be changed as the town changes.

Robin Davis, head of the central business district group who has spearheaded much of the recent downtown revitalization efforts, left the workshop hopeful about the town’s future.

“I’m very optimistic that we’ll be able to obtain all the funding and all the partners for our revitalization project,” she said.

As someone who grew up traveling to Norwood several times a year from the Charlotte area, Amanda Vigneaud said she never felt “the magic” of the town until she saw the water. She hopes whenever her kids enter Norwood and see a vibrant downtown, they will get that similar feeling of excitement.