Before official business was conducted during Monday evening’s Albemarle City Council meeting, one council member was recognized for his decades of public service by his alma mater Stanly Community College.

“I’m very honored and proud to have this honor bestowed upon me considering all of the outstanding productive citizens that SCC have yielded for our community,” Townsend said. 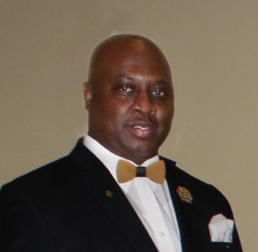 Initially not sure what he wanted to do with his life, Townsend credits SCC with instilling in him a passion for business (he served as an officer in SCC’s Phi Beta Lambda chapter) and community service.

“It is my hope through this recognition that it reach someone (possibly a high school graduate) that has a similar situation where they’re in the process of completing school and have no immediate plans and rather than doing nothing they seek the opportunities at the community college,” he said.

Townsend, who admitted he was “overwhelmingly surprised” to receive the honor, was presented with a framed certificate during the meeting, with his wife Tina and daughter Lyric by his side. The plan is for him to come to the community college’s graduation Thursday evening, where he will receive a wooden plaque.

In addition to serving District 1 on the City Council, a position he’s held since 2008, Townsend also chairs the annual Martin Luther King Jr. Prayer Breakfast, and is an active member of the Stanly County NAACP, the Friends of the E.E. Waddell Center and North Carolina Black Elected Municipal Officials.

A 1993 graduate of Leadership Stanly, Townsend has also been involved with the Stanly County Arts Council, Men Making a Difference and the Albemarle Downtown Development Corporation. In 2016, he was named Stanly County Citizen of the Year.

Townsend is a production supervisor with Preformed Line Products, where he’s worked for 27 years.

The Outstanding Alumni Award (OAA) “honors and recognizes those alumni who have achieved professional accomplishments in their chosen career and who have made significant contributions to their community and to the lives of others,” according to the college’s website.

The process for selecting the award recipient begins each year in the spring with an email sent to SCC faculty and staff asking for recommendations, Enamait said. A committee is then formed to review nominations and make a final recommendation to the executive leadership team.

“This year, the unanimous recommendation made to the senior staff was Mr. Townsend,” Enamait said. “We endorsed that recommendation from the internal committee and I’m thrilled that we’re able to recognize Dexter.”