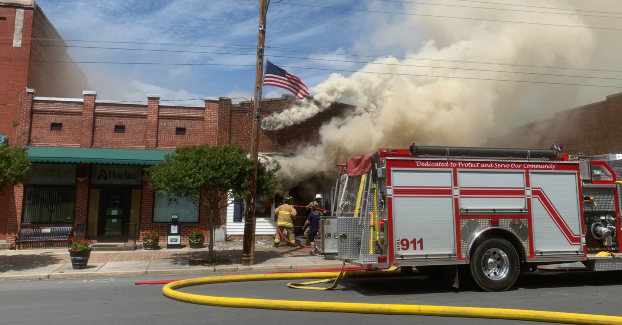 A fire occurred Thursday afternoon in downtown Badin next to the town hall. Photo courtesy of Jay Almond.

The fire was at 38 Falls Road next to the town hall, which was being renovated by contractors working for Tho and Phoudone Naovarath, in order to expand their business, Tho Pizza and Hot Subs.

Town Manager Jay Almond was in town hall around 2:30 p.m. when Tho knocked on the door with a look of “extreme concern on his face,” Almond said. Tho told him about a fire coming from next door.

After seeing smoke coming from the building, Almond called 911 and about eight minutes later fire personnel were on the scene. There were no people inside the building.

It took fire personnel about an hour and 50 minutes to get the blaze under control, Eudy said, noting that no one was hurt. The fire was contained to the one building.

The contents inside the building were lost though the structure is still standing.

Eudy said the cause of the fire was due to an electrical outlet and that it originated on the right wall.

Almond said the town hall is suffering from only smoke damage.

Krista Butler created a GoFundMe for Tho and Phoudone, which has already raised $1,715.

“As a community we need to COME TOGETHER and show Tho & Phoudone what being an American is about,” Butler wrote. “Let’s help them REBUILD their dream that was lost. Let’s give them HOPE.”