Pfeiffer falls in first round of Div. III lacrosse tourney 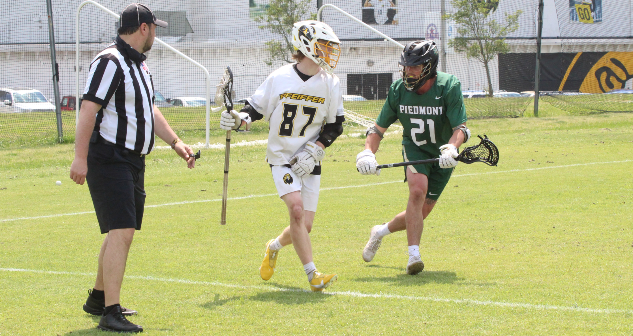 Fourth-ranked and host Lynchburg bolted to an early 4-0 lead en route to a 26-11 win over Pfeiffer University in the first round of the NCAA Division III Men’s Lacrosse Championship Saturday afternoon in Lynchburg, Virginia.

The Hornets (17-2) jumped out to a 4-0 lead in the first quarter, as four players notched goals. Pfeiffer’s first goal of the afternoon came when faceoff specialist Tucker Hill (Victor, N.Y.) won the faceoff and raced downfield and beat UL goalkeeper Patrick Moore to make it 4-1.

Lynchburg made it 5-1 at 6:48, but Pfeiffer responded when senior Jared Nelson (Vestal, N.Y.) scored an unassisted goal at 5:44.

The Hornets scored three consecutive goals, pushing their lead to 8-2 but Jacob Leone (Raleigh, N.C.) unleashed a shot from distance at the close of the quarter that skipped past the Hornet goalkeeper to pull Pfeiffer to 8-3 at the end of the quarter.

The Falcons (12-2) then opened the scoring in the second quarter on a goal from John Allen (Lebanon, Ohio) at 14:27. After another Lynchburg score, Quinn Becraft (Huntersville, N.C.) scored an unassisted goal at 12:33 to make it 9-5.

Lynchburg then went on a tear, scoring seven straight to take the 16-5 lead into halftime.

The Hornet lead would grow to 19-5, but Allen scored his second goal of the game at 7:47 to make it 19-6. Two more Lynchburg goals and another Pfeiffer score from Allen provided the 21-7 tally at the end of the third.

In the fourth, Becraft scored again at 7:29 on an assist from Nelson. Lynchburg would score twice more before Nelson supplied an assist to Becraft with 2:42 remaining. That assist for Nelson broke the NCAA All-Division (I, II, III) Career Points record. Nelson would then connect with Becraft again at 2:14 to give him his 453rd career point.

Becraft would score at 1:56, notching his team-high fifth goal of the game on an assist from Corey Choberka (Vestal, N.Y.) to provide the 26-11 final.

Pfeiffer concludes the 2021 season with a 12-2 overall record while participating in the NCAA Division III Tournament for the first time in school history.