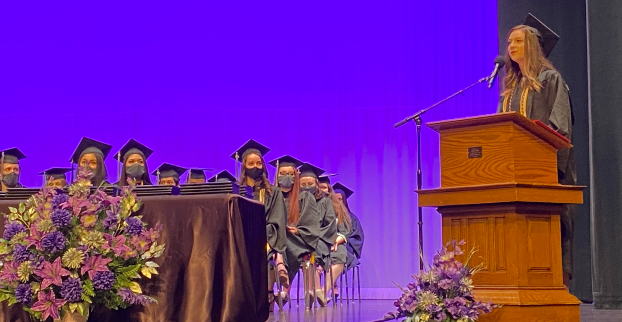 One of the most unusual, uncomfortable and trying school years ended with the most normal and beloved of ceremonies Monday night as 46 Stanly Early College High School seniors took part in graduation at the Stanly County Agri-Civic Center.
“We are glad that we are able to honor you in a somewhat normal graduation ceremony in the most abnormal year of my lifetime,” said principal Kevin Adams, who noted that he began his SEC career four years ago when the graduating seniors were freshmen.
Though the coronavirus pandemic certainly caused hardships — the students spent the whole year engaged in online learning — the 46 seniors still earned more than $2.2 million in scholarships, and will attend colleges such as UNC Chapel Hill, N.C. State and UNC Charlotte. In addition, more than 91 percent of SEC graduates earned their associates degree or certification from Stanly Community College. All of the students graduated with more than 40 hours of transferable college credit.
Reflecting on her time at SEC, Abigail Wright was appreciative that, even though the work load could be tough at times, her teachers always had faith in her.
“I can remember each and every one of my teachers telling me that they believed in me and that they knew that I could succeed and that’s the kind of confidence that I hope everyone can experience in their lives,” she said.
English teacher Marina Shankle alluded to several literary characters in her speech, as she challenged the graduates to keep working hard into the future. Similar to Atticus Finch, Shankle told the students to “stand up for what is right, for truth and justice even if you’re standing alone,” while unlike Romeo and Juliet, “think of the consequences of your actions and the way your actions will affect others.”
“You’re the main character in your own story,” Shankle said toward the end of her speech, “so make it a good one.”
Grace Dombrowski, who gave the distinguished graduate address, noted that while the expectations of completing both high school and college courses was initially daunting as a freshman, she made it through by forming close relationships with her classmates.
“The moment I found those people the weight of it all began to lessen because going through something together is much better than going through something alone,” she said.
Dombrowski ended her speech with advice for her fellow graduates: “Don’t be afraid to show your imperfections, be open to the changes life brings you and know that whatever the opportunity is, it’s always worth showing up.”
Stanly County Schools Superintendent Dr. Jarrod Dennis brought up the film “Top Gun” when he referred to the seniors as “mavericks” because of how they had academically set themselves apart compared to seniors from traditional high schools.
“You in many ways are mavericks,” he said, noting how many already have college credit which will collectively save them millions in tuition, “and by definition a maverick is a person who is unconventional and independent and does not think or behave in the same way as other people.”
Shortly after that, the mavericks received their diplomas, flipped the tassels over to the left side
and officially became Stanly Early College High School graduates.