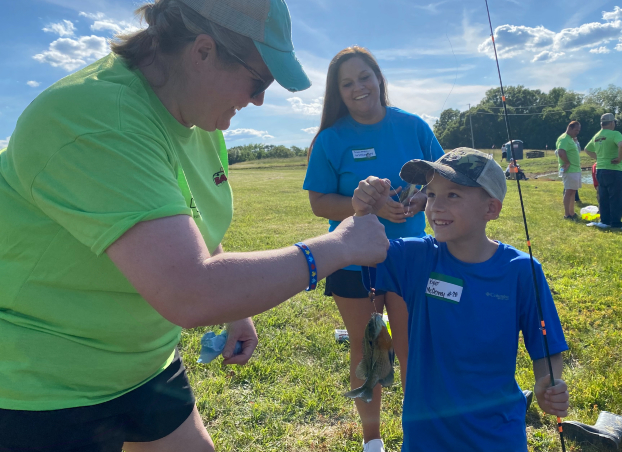 Casie Culp helps Kyler McClenney with his fish while his mom Summer looks on.

Smiles were abundant on a sunny Saturday evening as young people across the county enjoyed fishing in New London as part of the second annual Braden’s Fishing for Autism Awareness event.

Sponsored by the nonprofit Hands of a Sportsman, along with many other groups and individuals, the event was an opportunity for children and their families to enjoy the outdoors and hopefully catch some fish in the process.

It was started last year by Carla Poplin and her father, Frankie Fraley, to raise awareness about autism (the event is named after Poplin’s autistic son Braden). But it didn’t gain as much traction due to the COVID-19 pandemic.

In addition to fishing, for the past 25 years Fraley has invited kids in the area to go turkey and deer hunting.

The fishing was held at Fraley’s pond, stocked full of bass, catfish and a variety of brim. N.C. Wildlife officers were also present to advise kids as they safely shot BB guns.

This year, roughly 60 children showed up for the event, which began around 4 p.m. and ended around 9 p.m. with fireworks. Many notable local figures attended, including N.C. Rep. Wayne Sasser and Sheriff Jeff Crisco. There were also numerous volunteers stationed around the pond to help kids unhook their fish.

Poplin, her father and the community raised about $7,000 to organize the event.

Branson Palmer, owner of Bait on 8 in New London, took groups of kids out on his boat, where they could actually enjoy fishing on the lake.

With so many young kids having spent the majority of the past year working from home, the event was a chance to allow children and their families a chance to relax and have fun in nature.

“I encourage parents to get out with their kids,” Fraley said. “Take them fishing, take them hiking, do anything.”

Each child also took home a rod and reel along with a tackle box, provided by Bait on 8, to encourage them to continue fishing.

“It’s really to further the introduction to sporting and outdoor-type activity for kids that typically might not be exposed to that kind of stuff,” Poplin said. 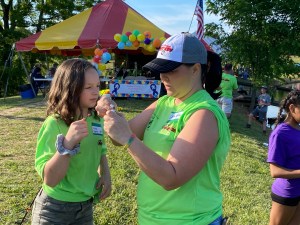 Carla Poplin with her daughter Sophie.

This was the second year that Summer and C.J. McClenney took their seven kids to the Fraley’s pond.

“I love watching them catch fish, it’s the best feeling ever,” Summer said, noting last year’s event was the children’s best day of 2020. And they had been anxiously awaiting coming back to the pond this year.

“We literally talked about this day ever since we left last year,” Summer said.

One of her children, 9-year-old Jayce Harden, who had on rain boats so he could wade in the water, said his favorite part of the event was catching fish with his siblings and parents. By the time he talked with the SNAP, he had already caught three fish, including a bluegill, also known as a brim. 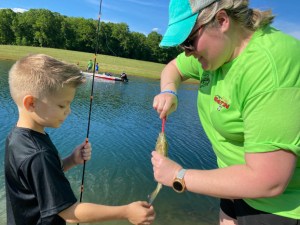 “It’s a pretty cool event all around,” said Austin Townsend, who was at the event with his brother, sister-in-law and their kids. “It’s a good time out of the house, especially with the horrible year we just had with the pandemic.” 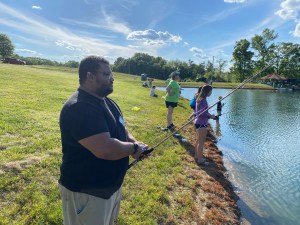 Austin Townsend fishes with many others as part of Braden’s Fishing for Autism Awareness event.

Five-year-old Braxton Harrington was fishing alongside his father, Bradley. When asked what he most enjoyed about the event, Braxton replied, “Catching every single fish.” 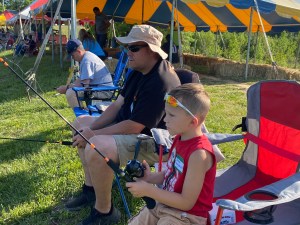 The plan is for Braden’s Fishing for Autism Awareness to become an annual event. The goal for next year is to bring 100 kids out to the pond.