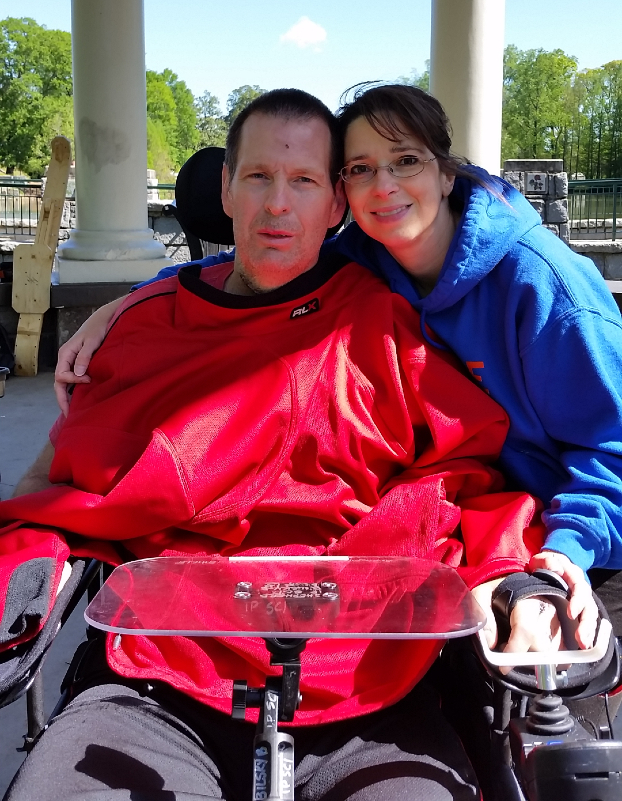 On March 25, 2016, Kelly Caudle embarked on a bike ride along Paul’s Crossing Road in the northern part of the county.

As a long-time athlete, the Albemarle resident, who also teaches at Stanly Community College, enjoyed physical activity, especially running and bike riding. Over the years, he’s competed in numerous triathlons and has participated in many of the annual runs organized by Vac & Dash. He even taught a triathlon class at the Stanly County YMCA.

In 2014, for example, Caudle competed in 14 triathlons to raise money for his nephew who has Duchenne Muscular Dystrophy. 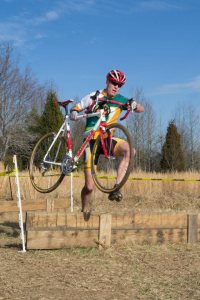 Kelly Caudle was an avid runner and biker, who took part in many triathlons across the state. Photo courtesy of Amber Nimocks.

But that bike ride in late March turned out to be anything but normal.

As he was on the far side of the lane about to turn right, the driver of a Ford F-150 cut the corner and collided with Caudle. Within the blink of an eye, as Caudle laid on the ground paralyzed from the neck down due to a spinal cord injury, his life was forever altered.

He was quickly airlifted to Atrium Health in Charlotte, where doctors performed surgery to fuse his C3-C4 vertebrae. He had an incomplete injury, he said, which fortunately meant the accident did not sever his spinal cord.

“It was a terrible surgery as it affected my ability to talk and swallow for several weeks,” he said.

Caudle spent a week in Charlotte before being transferred to the Shepherd Center in Atlanta, a private hospital which focuses on patients dealing with spinal cord injuries.

He had to slowly relearn how to walk and move his hands. Caudle spent about three months in Atlanta before coming home. 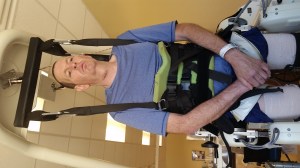 Kelly Caudle relearns how to walk via a special robot at Shepherd Center in Atlanta. Photo courtesy of Kelly Caudle.

While he can move his arms and legs, he’s in constant pain and even five years removed from his accident, Caudle still struggles with basic tasks like changing a light bulb or shooting basketball with his nephew.

From his mid-chest down to his legs, he can’t feel anything and has constant nerve pain, which impacts his balance and ability to walk. He has other lingering issues, including back pain and intestinal problems. Due to a bad blood clot in his leg after the accident, Caudle is also on blood thinners.

He tried to ride a bike last August, but he crashed and broke his arm because his hands slipped off the handle bars.

“Before, I had no limitations really,” he said. “Now, I am a 51-year-old man trapped in a body that functions like a 75-year-old.”

He’s considering early retirement, an idea, he said, that wouldn’t have been on his radar if not for the accident.

Caudle’s medical bills have increased as he continues to travel to the Shepard Center a few times each year. Also, after accruing about a year’s worth of sick leave before his accident, he is set to run out after he takes a few months off this fall.

Over the past year, the coronavirus pandemic added another layer of stress to Caudle and his wife Susan, though both are fully vaccinated.

“That’s just insane that that’s the kind of life I have to live due to someone else’s negligence,” he said.

The state is one of four in the country that still has what’s called a contributory negligence law, according to North Carolina Advocates for Justice, a nonpartisan association of legal professionals that work to protect individuals from injustice. It means if a victim is even just 1 percent at fault for an accident they are not entitled to recover any damages from those who caused the accident.

Michael Green, a professor at the Wake Forest University School of Law and a nationally recognized expert in this area of the law, said contributory negligence laws are clearly unfair, according to a NCAJ press release.

“The injustice of contributory negligence has been widely recognized and led to its wholesale elimination in all but a small handful of states, including, unfortunately, North Carolina,” Green said. “It is past time to remedy this unfairness to injury victims in this state.”

Caudle said the truck driver’s lawyer dissuaded Caudle from suing by bringing to his attention the contributory negligence law. In a trial, the burden of proof would have been on Caudle to prove that his actions — even down to the color of his outfit — did not at all contribute to the accident.

The mention of contributory negligence “was used basically as a threat against me,” he said, adding that he felt victimized a second time.

But the law might soon be changed. The state Senate has introduced a bill — The Victims’ Fair Treatment Act — that if passed would level the playing field for North Carolinians by providing them an opportunity to recover damages when they are injured by another party.

“I was ecstatic to hear that it (contributory negligence law) was possibly being changed,” Caudle said when he heard about VFTA.

Over the past few weeks, Caudle has been working with North Carolina Advocates for Justice to raise awareness of the bill. He plans to discuss the bill with Stanly’s state officials in the near future.

Even if VFTA, which is currently being discussed in committee, becomes law, it would not impact Caudle. Still, he hopes it could help other people who find themselves in similar situations to the one he was in.

“I love would to see it changed to help other people in the future,” he said.