Nelson, from Vestal, New York, helped Pfeiffer to a 12-2 overall mark this season that included a trip to the program’s first NCAA Tournament appearance. Pfeiffer also claimed the USA South Championship and finished league play with a flawless 8-0 record. 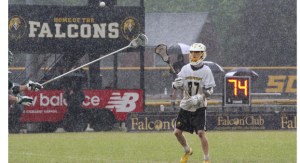 On May 1, Nelson broke the NCAA All-Division Career Record for assists in the Falcons’ 13-11 home win over rival Greensboro. At the 8:27 mark of the second quarter, Nelson dished a pass to teammate Jacob Leone that broke the record, previously set by Rick Gilbert of Hobart College in 1974. Nelson finished the season with 300 career assists.

Nelson also set the NCAA All-Division Career Record for points in the Falcons’ 26-11 loss at fourth-ranked Lynchburg in the first round of the NCAA Tournament on May 15. Nelson’s assist to teammate Quinn Becraft at the 2:42 mark of the fourth quarter gave him the record, previously 451 points and was held by Jason Coffman of Salisbury (1993-96). Nelson added another assist in the late stages of the game to finish with 453 points for his career.