Officers with the Albemarle Police Department have received several reports of vehicle break-ins over the past several weeks.

Several of these reported incidents occurred in local neighborhoods near Anderson Road in Albemarle. 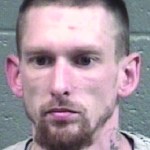 He is wanted at this time. If you have any additional information as to the whereabouts of Mesimer, call the Albemarle Police Department at 704-984-9500 or leave an anonymous tip on the Tipline at 704-984-9511.