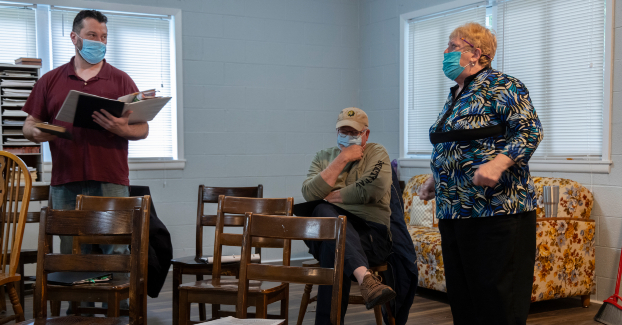 It’s been more than a year since the Uwharrie Players physically graced the stage for a production. Their last performance of “The Hallelujah Girls” wrapped up in mid-March 2020, literally right as the whole world was changing due to the novel coronavirus.

Two other performances scheduled for later in the year were canceled as the pandemic worsened.

The group last summer was able to produce “The Virtual Family,” a series of 13 scenes uploaded to YouTube depicting a family struggling in quarantine, but it wasn’t the same as performing in front of a live audience, performers said.

But with more people getting vaccinated, Covid cases continuing to dwindle and mandatory capacity and gathering requirements being lifted, the Players are returning in June for their latest production, a Southern comedy titled “I’m Dying to Be in the Choir.”

Directed by James Cotton, the play focuses on the dynamics of a small church choir in a small, unspecified town and the colorful personalities of its members. The plot centers around the group trying to get their oldest member to come back after she leaves following disagreements with the new director.

“Everybody’s got some weird, funny quirks,” Cotton said, including a few who are stingy with money and one who struggles adjusting his hearing aids. “It’s the kind of people that probably anyone knows.”

The play was written by long-time Players member Gary Moran. Cotton said this will be the second time the show will be produced.

Cotton said the initial plan at the beginning of the year, when the pandemic was arguably at its worst, was to pre-record the show so people could watch it online, but things changed as the threat of Covid began to gradually lessen.

The first real sign of a potential return to normalcy for the Players occurred in April, when a robust crowd showed up for auditions.

“I was very happy with the turnout for the people who actually came to audition,” he said, noting the numbers were so great he had to turn a few people away. “That told me that people were itching to come back and be on the stage.”

The cast has been practicing (and laughing) for the past few weeks.

“Everyone’s been having a great time and happy to be able to do this again,” Cotton said.

With all of the many struggles the past year has brought so many people, Cotton hopes the play can provide levity and amusement.

“I think right now people need the release of just laughing at this show and the things happening…to just get away from their worries for an hour and a half,” he said.

Cotton said there will be no capacity limits, but he does encourage patrons to wear masks and socially distance whenever possible.

Tickets can be purchased online (http://www.uwharrieplayers.org.) and are also available at First Bank locations throughout the county, along with Second Street Sundries and Starnes Jewelers. Advance tickets are $13 for adults, $10 for seniors/juniors and $5 for children.

The Uwharrie Players will put on another production, “Blithe Spirit,” during the the first two weeks in October.