STANLY the Magazine: Old homes have new lives as B&Bs 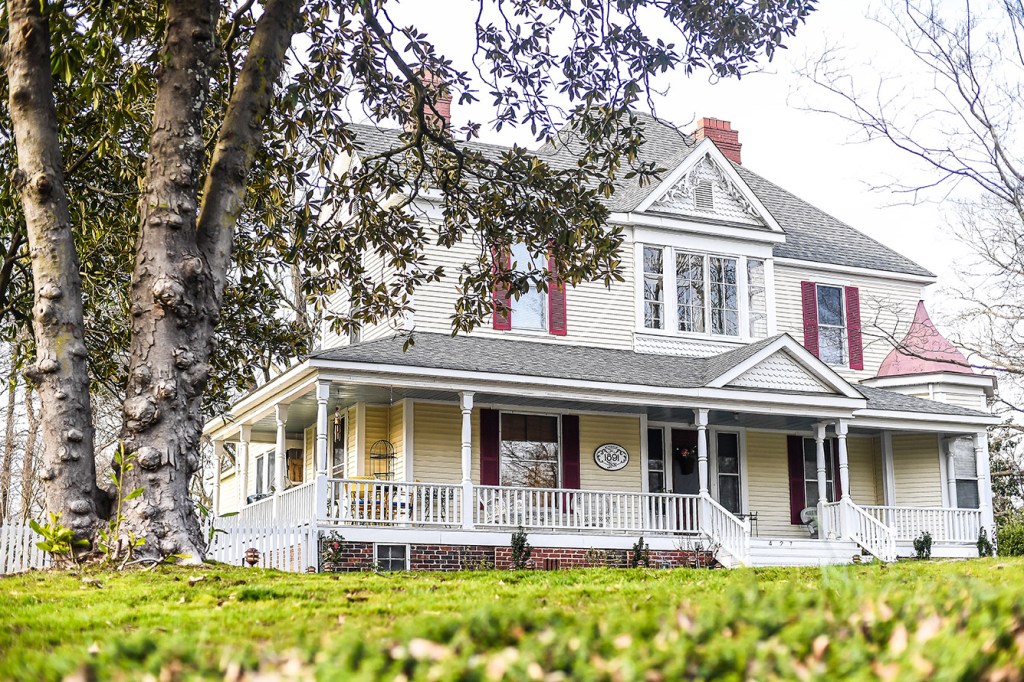 Many people travel to Stanly County each year for a host of reasons.

They might want to hike Morrow Mountain or kayak along Lake Tillery; they might be enrolled at Pfeiffer University or take classes at Stanly Community College; or they simply might want a nice respite away from big city life in Charlotte.

Over the past few years, two bed and breakfasts opened in Albemarle, offering guests a unique lodging experience.

One of the popular places for people to stay while they’re in the county is the 1891 Inn, which opened in April 2019.

Owners Ron Perrine and Charity Barbee spent the previous year renovating the property, which they bought in late 2017. 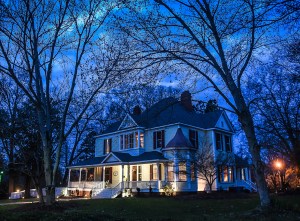 Known historically as the Brown-Parker house, the property is part of the Pee Dee Avenue Historic District, which was added to the National Register of Historic Places in 1998. The inn was built by architect L.A. Moody for Albemarle attorney J.M. Brown Sr. and his wife, Martha Cornelia Anderson, and it stayed in the family until J. Caesar Parker bought it in 1937. The property had been renovated several times over the years before Perrine and Barbee came on the scene.

Perrine and Barbee moved to Albemarle from Cornelius more than 20 years ago to be closer to Barbee’s family. Perrine, who retired a few years ago from Interactive Safety Products, runs the B&B. 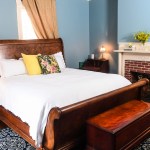 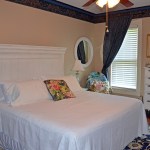 For additional space, guests can inquire about the Maralise Room (it’s not available to book online) which offers another king size bed and similar amenities. It was named after the Maralise Hotel, which was built in 1910 and located in downtown Albemarle. According to the B&B’s website, President Theodore Roosevelt and actor Jimmy Stewart were famous guests of the hotel.

While staying at the inn, guests can enjoy waking up to a classic breakfast (waffles, omelets, bacon and eggs) around 8:30 each morning.

In order to promote local artists in the area, the B&B has pieces of art on the walls, which people can purchase.

Business was steady throughout 2019. The B&B had almost 100 bookings. Perrine said weddings and funerals were what brought many of his customers to the area, though tourism spots like Morrow Mountain and speaking engagements at Pfeiffer University also drove customers to the B&B. Many runners participating in events organized by Vac & Dash have also taken advantage of the property.

Though it hasn’t materialized yet, Perrine expects Pfeiffer’s new health sciences facility in downtown Albemarle to drive people to the B&B, especially parents visiting their children.

After a nice 2019, things quickly changed in 2020 with the onset of the coronavirus pandemic.

With people afraid to travel, the B&B struggled to get customers.

“The Covid virus really slammed the door on me,” Perrine said.

While the B&B struggled throughout the holidays and into the new year, Perrine said business has been on the upswing since March. He said he had a very robust April, especially around Easter, and is anticipating a strong summer season.

A good portion of the business has been Pfeiffer University-driven, especially with prospective candidates interviewing for positions within the university.

“I’m getting some business culture from Pfeiffer because they have people all the time coming (to the university) and they put them up and when they’re putting them up, they use us,” Perrine said, noting that he has a “wonderful working relationship” with the school.

“We started off well, the virus put us down, but we’re still hanging in there and we’re still looking to rebound,” Perrine said, noting that he feels confident that customers will come back once the pandemic ends and people can safely travel. He also wants to use his space to host events and weddings.

As someone who has stayed in many bed and breakfasts across the country, one of Perrine’s goals was to someday open his own.

“We’ve traveled to B&B’s across the country and we know how to treat people,” he said.

He tries to be as approachable and accommodating as possible to his guests. He also acknowledged that he enjoys meeting and getting to know his guests.

Though the business is still relatively new, the 1891 Inn has done quite well thus far. Sixteen people have posted comments about the 1891 Inn on Tripadvisor, the online travel review platform, and each gave it glowing, five star reviews, with many highlighting how comfortable Perrine and Barbee made them feel. 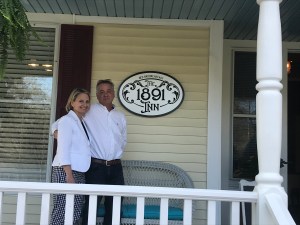 Perrine’s had return guests and though the majority of his customers are from the Southeast, he’s had guests from as far as Florida, New York and California.

‘Bed and breakfast with a twist’

The bed and breakfast Hall House and Gardens launched its soft opening around November of last year.

The property, at 343 N. Second St., was purchased in 2017 by David and Brenda Scarboro, who spent the next two and a half years renovating it. She died in 2019 before the house was fully renovated.

The Scarboros previously owned and renovated the Brown-Parker House, many decades before Perrine and Barbee transformed it into the 1891 Inn.

The house was built in 1912 and owned by Dr. Julius Clegg Hall, a pharmacist who owned Hall’s Pharmacy in downtown Albemarle. It was recently listed on the National Register of Historic Places. 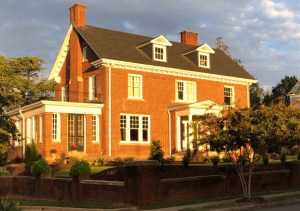 The Hall House and Gardens in downtown Albemarle is run by David Scarboro. Photo courtesy of John Williams.

The single family dwelling is a two-story, 3,769-square-foot Georgian home which can sleep five to six people. According to the website, the house “is comprised of a formal dining room, living room, warming kitchen, grand staircase, two lovely sun porches and three bedrooms all restored to their original glory from 1912.”

The HH&G offers three rooms, designed to offer a unique glimpse into the Hall family.

The Apothecary Room, named for Dr. Hall’s pharmacy, is a queen-size room filled with memorabilia from his pharmacy, including photographs, newspaper articles and a pulled canvas of a prescription written by Hall.

The Mayfarer Room, which pays homage to Hall’s daughter Evelyn and her travels around the world in 1931, features letters and postcards from her stops in locales such as Naples, Pompei and the Vatican. During her time abroad, she reportedly kissed the Pope’s ring and danced with Hollywood leading man Cary Grant.

The Pergola Room is the largest room with a king-size bed, sofa and gas fireplace. It is named after the white pergola outside.

There is also a large historic garden in the back which will be used for weddings and concerts. It’s called Brenda’s Secret Garden, named after Mrs. Scarboro’s favorite book, Williams said. They hope to plant irises (her favorite flower) in the spring.

The garden was designed by Philadelphia landscape architect William Ritchie around 1914 and later by Earle Draper, a Charlotte-based architect, in the 1920s. Dr. Hall wanted his garden to be compared to those found at the Reynolda House in Winston-Salem and the Biltmore Estate in Asheville, Williams said.

“We’re really, really proud of this garden,” Williams said, noting it will be a space for the community to use and enjoy. 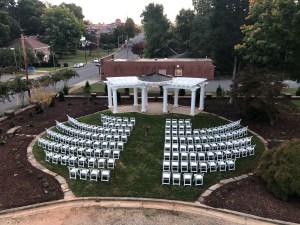 The plan is to utilize the garden and pergola for weddings, concerts and other outdoor events. Photo courtesy of John Williams.

Unlike most B&Bs, including the 1891 Inn, there is no complimentary in-house breakfast, though Brand said staff will adapt to fit each customers’ needs. So, for example, if guests want a morning meal, a trip could be made to the grocery store to procure food.

The staff is also in the process of converting the garage into a Prohibition era speakeasy, with ceiling and floor tiles from Dr. Hall’s pharmacy decorating the inside. While they won’t have a liquor license, “the guests can hire someone to come in and do a wine tasting or serve guests from that bar,” Brand said.

Compared to more traditional bed and breakfasts, “I guess we’re a B&B with a twist,” she said.

Brand acknowledged the pandemic created an opportunity for the fledgling business to offer boutique events for people whose plans for bigger events had to be canceled. HH&G has already hosted several intimate weddings and baby showers and is planning on hosting small community events such as a charcuterie and cheese class and a chocolate and wine tasting. (The only stipulation is in order to have an event on the property, some members of the party must be guests of the house.)

“I felt like in some ways we were able to reach out to people that were not able to have their special events the way they had originally planned and offer them something also beautiful, but a little more intimate and COVID safe,” Brand said.

While the original plan was to rent the three rooms to different guests, due to the pandemic, HH&G is renting rooms to only one family at a time.

“You are not going to be in the house with anybody outside of your group,” Williams said.

He estimates since the soft opening, HH&G has had around a dozen bookings.

The idea was always for HH&G to be a special place for people in the community to utilize and enjoy.

“We are Stanly County and we want to give the people that we grew up with and we live with and our families something amazing,” Brand said. “But then what’s come from that is other people are coming into Albemarle to see their family or for an event and they’re going to find it a nice place to stay as well.”

Williams said the idea is to still have an official grand opening, possibly in the spring, though no date has been set.