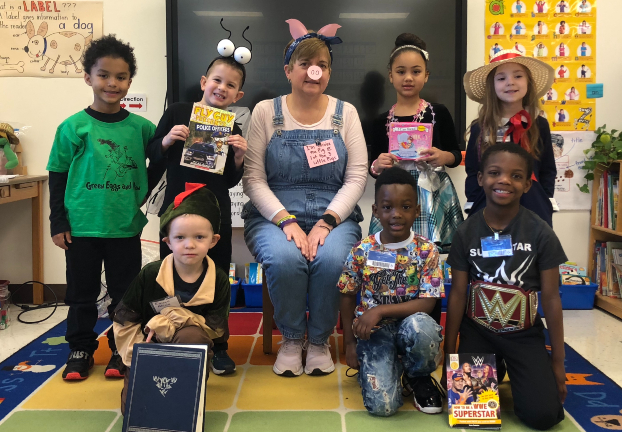 One morning, about three years ago, Julie Busch was on cafeteria duty at Central Elementary School, where she regularly supervised kindergarten and first grade students as they ate breakfast, when she noticed the cafeteria workers were shorthanded.

Wanting to help, Busch approached the manager with a request. “Can I do that, can I help you serve breakfast?” she asked.

The kindergarten teacher was given the green-light and began what turned into a daily routine of greeting each student while handing them their prepackaged breakfast. (Due to the pandemic, the kids don’t eat in the cafeteria.)

The simple gesture broadened her ability to connect with and get to know young students — which, as an educator, has always been her life’s passion.

“I loved that because I would see the kindergarten and the first grade, so I was seeing kids that I had already taught and then the kids I didn’t know, I was getting to learn,” she said, noting that even if she was struggling, the students always picked up her spirits.

And as the first teacher they likely saw each day, the students came to confide in Busch, revealing to her all sorts of information. From singing “Happy Birthday” to consoling students after their pets died, Busch never took for granted her early morning interactions.

“They told me everything coming through that line,” she said, “and there was no better way to start my day than serving breakfast…I loved it.”

Busch’s willingness to serve breakfast to students each morning represents just one example of the many ways she’s gone above and beyond during her teaching career. But after 31 years, Busch, 53, has decided to retire.

She had seriously considered retiring last year, but due to all the uncertainty with the pandemic, decided to come back for one more year.

Central Elementary Principal Melissa Smith recalls that Busch would always say that “all of us in the education system are doing missionary work.” As she prepares for retirement, Smith notes those words are especially apt in describing Busch.

“She has been a missionary to the children of Stanly County and Julie goes beyond the four walls to make sure they have everything that they need,” Smith said. “She is a partner to the families, to the community, whatever it takes to help a child achieve or reach their maximum potential, Julie Busch is going to make it happen.”

It can often take people many years to figure out what they want to do when they grow up. It’s not uncommon for college students, for example, to change majors multiple times, or for people working in one industry to completely pivot and pursue another.

That was never the case with Busch. Even at an early age, she always knew she wanted to teach young kids.

“It was my life’s calling,” she said.

When she was a young girl, she recalled that whenever her parents turned her light off at night, she would quietly place her stuff animals on her bed and school would be in session. This lasted until her parents caught wind, came back in her room and told her to go to sleep.

While many of her classmates took on traditional jobs like waitressing, Busch spent her time baby-sitting, where she began to foster a love for young children.

After she graduated with a teaching degree from Appalachian State University in 1990, the Stanly County native was able to make the official transition from instructing stuffed animals to working with 5-and 6-year-old kids.

She spent a few years as an ESL facilitator in Montgomery County before transitioning to Albemarle City Schools, where she taught at the old North Albemarle Elementary. After teaching there for 19 years, she transitioned to Central Elementary, where’s she’s been ever since.

As the first person students interact with and get to know when beginning their K-12 career, kindergarten teachers always play a foundational role in setting the tone for what school life is all about.

And Busch doesn’t take that responsibility lightly. With every new school year, she works to get to know her students as individuals, knowing that each comes to the classroom with different experiences.

Some students have gone through the daycare-to-preschool pipeline and are comfortable in social settings while others have spent most of their time at home, with little interaction with kids their age.

“I always wanted to meet them where they were and then make sure that they were successful,” Busch said, noting that seeing her kids grow throughout the year is the most rewarding part.

Like any veteran teacher, Busch has come to realize that the specifics of what she teaches is secondary to the relationships she forms with her students. She always enjoys when former students remember her and come back to reminisce — a key indication that the connections she’s fostered are still alive and strong.

“Our job is to educate them, but I think above that, it is the relationships we form,” she said. “That’s probably my true passion and drive for staying in it for 31 years.”

As someone who’s been in education for more than three decades, Busch has started to teach multiple generations of family members. Three students currently in her class have parents that Busch previously taught.

“I’ve reestablished those relationships with those three moms because now I have their children this year,” Busch said. 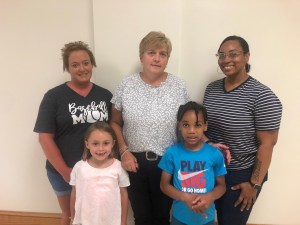 She mentioned that over the years, her students have taught her many lessons, perhaps none bigger than to love people for who they are, no matter their background or what they’ve been through.

“A kindergartener does not see your flaws and we should all be like that,” she said.

Once she retires, she plans to spend more time with her family. Her husband Derek works for the school system while her daughter Maggie attends Appalachian State. Her son Judson will be a senior at North Stanly next year. She also will have more time to take care of her mom and other older family members.

But as a lifelong educator, she still plans to teach one way or another. She’s looked into online education, including teaching English to children in China, which is something one of her friends participates in.

She also wants to have some sort of presence in the schools, whether it’s reading to young children, helping teachers or working as a substitute teacher.

Busch has also seriously considered an eventual return to the cafeteria, possibly as a substitute cafeteria worker, since she’s always held the workers in high regard.