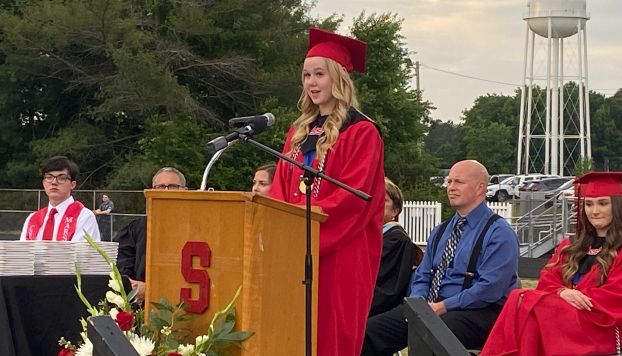 Hailey Clodfelter talks about what the past year has been like for the South Stanly seniors.

On a brisk Friday evening at the South Stanly High School football field, 118 eager students received their diplomas as a part of commencement exercises for the 2020-2021 academic year.

After a brief introduction from Principal Tim Woody, Savanna Hurley led everyone in attendance in the Pledge of Allegiance and sang the national anthem.

Reflecting on her four years at South Stanly, Madeline Wright reminisced about several notable moments the Class of 2021 shared with each other, including intense dance battles during lunch, rotten eggs being thrown at each other in biology class, the volleyball team dancing to “Baby Shark” and the softball team making it all the way to the 1A State Championship this year.

Like high school seniors all across the country, Wright talked about how her class was deprived of a “normal senior year” due to the COVID-19 pandemic. While many of the students were initially happy to work from home and be out of school last March, those feelings “quickly turned into sadness, anger and frustration.”

She noted the tight bonds the seniors forged during their time at South helped them to “create some of the greatest history at South.”

Wright ended by thanking her fellow classmates “for making these four years the absolute best four years of my life.”

Student Body President Hailey Clodfelter mentioned that the past year “has taught us to appreciate one another, realize that life is short, and tomorrow as we know it is not promised.”

Both Clodfelter and Wright took time to talk about the loss of their classmate Cameron Needham, who died last November in a car accident.

“We will forever cherish the bonds that each of us made with Cameron because he was friends with everyone,” Wright said.

Clodfelter said that though the Class of 2021 had a tough ending to their career, “we finished stronger than we ever expected,” noting that the determination and willpower the class demonstrated “are going to carry us far into the future.”

The commencement speaker, deputy superintendent Vicki Calvert, discussed the Parable of the Pencil, telling the graduates that they will experience tough times but these moments will only help to sharpen them and make them better people. While they will make mistakes, like a good pencil eraser, they can always work to correct them.

She congratulated the seniors for their resolve in adapting and overcoming the many obstacles of the past year and ended with a quote: “See the world not as it is, but as it could be.”

Shortly after Calvert’s speech, 2019-2020 SCS Teacher of the Year Michael Curlee announced the names of the graduates as they walked on stage and received their diplomas, with many taking a few seconds to strike a pose for the cheering audience. 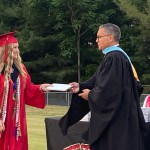 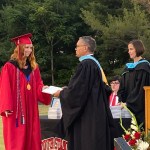 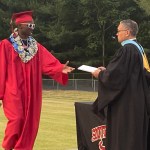 After the presentation of diplomas, Woody offered the students some last bits of wisdom.

“We admonish you to continue learning throughout your lives,” he said. “Underneath the robes within, you have the individual strengths and talents, both evident and yet to be discovered, and the potential for success in your lives.”

After those words, mortarboards were joyously tossed high into the night sky as Woody pronounced the Class of 2021 as having officially graduated. 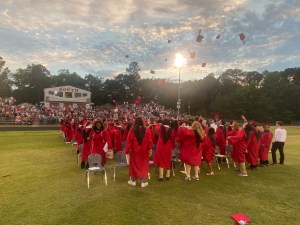 Class of 2021 throws their mortarboards in the air after having officially graduated from South Stanly High School.