STANLY THE MAGAZINE: For Gene Starnes, there really is no place like home 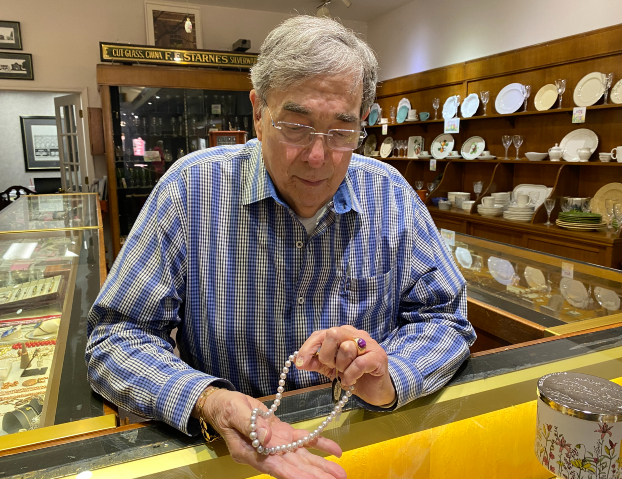 When Gene Starnes arrived at Lenoir-Rhyne University in Hickory in the early 1960s, he didn’t necessarily have a detailed plan for what he wanted to do with his life.

He briefly considered a career in marine biology or some similar field, since he always had a love for animals and plants.

Whatever path he chose, Starnes assumed he’d do it some place away from his hometown of Albemarle. While he didn’t count out eventually moving back to the city, he planned to take time after graduation to explore and travel to other parts of the country. He even noted that during high school, his classmates probably thought he was least likely among them to remain in the city.

But life can be funny sometimes. While in college, he developed a love for salesmanship and came to the realization that the best place to apply his degree in business and economics was none other than his family’s jewelry business in downtown Albemarle.

As someone with a lust for travel and adventure, Starnes ultimately enjoyed all that and more during his time with Starnes Jewelers.

Even as he’s dealt with several health issues in recent years, Starnes still comes to work each day, excited to reminisce and interact with lifelong customers who have since become good friends.

That’s not a surprise since, according to Pat Bramlett, his sister, he’s always been a people-person.

“He is always out doing things with people,” she said. “That’s one of the reasons he’s stayed at Starnes Jewelers” over the years. “He just loves people.”

‘I grew up in the store’

Born in 1941, just a few blocks from downtown, he was the third generation of Starnes men bearing the name Francis Eugene.

By all accounts, he had an idyllic childhood, growing up in a small, close-knit community. He enjoyed playing with friends in the neighborhood and watching movies (especially ones featuring cowboys, circuses and Disney) with freshly made popcorn in the basement of his house on a 16 millimeter projector on Saturday nights.

The Starnes house was the popular gathering place for young people, as he and his siblings, Pat and younger sister Judy, hosted many parties over the years.

“It was a wonderful place to grow up,” he said.

Even at early age, he spent much of his time working at the family business.

“I grew up in the store,” he said. “As long as I was big enough to unpack something or pick up a broom or wipe a case.”

Originally founded by his grandfather F.E. Starnes in 1898, Starnes Jewelers is the oldest continually-run family retail business in the county.

His grandfather, who was an optometrist and an apprentice to a jeweler in Monroe, set out on his bike to find a location to open his own jewelry store. According to family lore, F.E. fell off his bike in Albemarle. As he got up, he discovered a horseshoe beside the road, which he took for a sign that Albemarle was the right location.

“He picked up that horseshoe and brought it with him for good luck,” Starnes said about his grandfather. The horseshoe is framed and hanging inside the store. 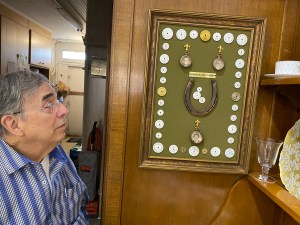 The lucky horseshoe that Starnes’ grandfather F.E. discovered in Albemarle more than 120 years ago.

F.E. Starnes moved locations several times over the years before settling on its current spot on Main Street in 1907. He also opened several other stores across the state in Concord, Salisbury, Lexington, Southern Pines and Badin (though most of these were not around when Gene Starnes was growing up). Because of his increasing influence, he noted his grandfather became well-known across much of North Carolina in the early 20th century.

Starnes cultivated a deep knowledge of jewelry due to his time at the shop and accompanying his parents to numerous jewelry shows and conferences across much of the country, including New York City and Atlanta, where his parents would buy precious stones.

These national events were how Starnes and his family were able to network and establish close ties with other jewelers across the country. The business has been a member of the American Gem Society for close to 80 years, he said. The store has also been a member of many other gemological and retail organizations over the years.

Following his time at Lenoir-Rhyne, Starnes returned to the business in 1964. Even during his six-year stint with the Air National Guard in Badin, Starnes still found time to work nights and on the weekends.

“Any time I wasn’t at the Guard, I was working here,” he said.

His father started turning over key responsibilities to Starnes after he finished college, as a way to groom him to eventually take over the store once he retired. Around this time, Starnes also began buying shares of the business.

He took over the store after his father died in 1976. Starnes has now owned the store for about 45 years, longer than any other family member. 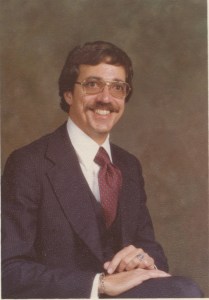 Gene Starnes in 1976, right around the time he took over the store. Photo courtesy of Pat Bramlett.

One of the more exciting parts about the business for Starnes has been the frequent travel.

Utilizing the store’s deep connections with jewelers across the world and its membership with numerous gemological associations, Starnes has been to more countries than he can count. He’s traveled across Europe, Africa (he once went on a safari with other jewelers), the Middle East, Australia, China and Antarctica. He’s visited gold, diamond, opal and sapphire mines during his trips abroad. 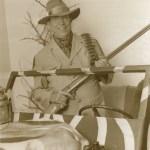 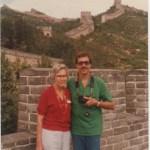 Gene Starnes with his mother Ruth at the Great Wall of China. Photo courtesy of Gene Starnes.

“We were buying stones in all these places and got connections, some of which we still have,” he said, noting he continued to travel up until a few years ago when health issues forced him to stop. Once he identified stones for the shop, they were then mailed to Albemarle.

Many of his exploits seem more fitting of a certain 007 British agent than a small-town jeweler from Albemarle.

On one trip to South Africa, Starnes climbed on his hands and knees with a flashlight attached to his helmet through numerous caves and tunnels, some 5,000 feet below the ground, after part of the diamond mine had recently collapsed. Once he left the site, the diamond company used him to inconspicuously transport millions of dollars of diamonds in a nondescript paper bag through the streets of Johannesburg to the local post office.

“Some of the men from the company were afraid they would be recognized and knew I wouldn’t,” he said, adding that the whole experience “was exciting.”

He also remembers climbing down into black opal mines on rickety ladders held together by coat hangers while in Lightning Ridge, a small outback town in Australia.

Starnes was part of a group that was one of the first in China to purchase non-government sanctioned pearls. He was also among the first groups to tour Russia after it reopened following the end of the Cold War.

Though most trips tended to last only about a day, Starnes does remember certain excursions, like when he purchased diamonds in Antwerp, a port city in Belgium, that lasted at least a week.

His sister Pat acknowledged that Starnes and their sister Judy both had a love for traveling to far-flung places that were often overlooked by others.

“You could think of a place that you’d say, ‘Well why would you go there?’ and they’d like to go,” she said.

Starnes, for example, has traveled to Iraq and Iran, and has seen the crown jewels of not just those countries, but most others that have a current or former monarchy.

He acknowledged most typical jewelry stores don’t have employees traveling the world hand-picking stones because most don’t have the deep connections with diamond companies and organizations like the AGS that Starnes Jewelers has fostered over its many decades.

For a sociable person like Starnes who’s never met a stranger, Pat said, meeting new people around the world was similar to meeting new customers at the store.

As valuable as these trips were from a business standpoint, they helped reveal to Starnes the common humanity that exists among all people.

“You get a greater appreciation of people and, even if you can’t speak the same language, how much we all have in common,” he said. “It just broadens your outlook on life and on people.”

Working with his brother-in-law

Since 1981, when Pat moved back to Albemarle, Starnes has worked alongside his brother-in-law, Chris Bramlett, a certified gemologist appraiser. The only time they’ve been apart was a 15-year stint in the 1990s and early 2000s when Bramlett left the business to establish his own jewelry store in downtown Concord.

Having previously held faculty positions at both the University of Alabama and East Tennessee State University, Bramlett, who received a bachelor’s, master’s and Ph.D. in chemistry, took several gemological courses once he and Pat made the decision to relocate to Albemarle.

“I knew obviously I wanted to apply the science to jewelry,” Bramlett said.

In March 2001, Bramlett received the Robert M. Shipley Award, which is conferred annually by the Gemological Society of America upon a member “for outstanding service to the society.” Bramlett said he’s the only gemologist in the state to have received it.

Even though Bramlett’s position as an appraiser differs from Starnes’ role as a jeweler, both said they still have to take yearly exams to maintain their titles.

“Not many businesses you have to do that in,” Starnes said.

Though he has no kids of his own (he was briefly married for a short time), he’s a surrogate father to Bramlett’s three children.

In addition to his work as a jeweler, Starnes has also been active in his local community. He’s a member of the Albemarle Rotary Club, was a member of the Historical Restructuring Committee and has been involved with the Stanly County Museum.

“We believe very strongly in giving back to the community,” Starnes said.

Unlike his brother-in-law though, who served for many years on the city council, Starnes has never been interested in getting involved in politics.

“I think his personal generosity has been important to many causes and institutions throughout the county,” Bramlett said.

“He’s been a good brother-in-law,” he added.

“Stable factor in the community”

As Albemarle continues to grow and evolve, Starnes’ steady presence in the shop is no doubt a source of comfort for many in the city as a sign that some things have remained the same.

“As so much business has left the downtown, he has sort of been the thing that’s held the downtown together in a way,” Pat said. “He’s been a stable factor in the community.”

He recently sold an engagement ring to a young man who was the fifth generation in his family to buy rings from the store.

“There’s not many stores that can say that,” he said.

Starnes has no plans to retire anytime soon. He just wants to keep serving his community as long as he can. Starnes and Bramlett have indicated though that the store will close once they are no longer around.

For the man who grew up imagining a life beyond his hometown, Starnes is content right where he is.

“I could be happy many places but no happier than I would be right here in Albemarle,” he said.