The city of Locust recently entered into a contract with AMT Engineering of Charlotte to conduct a feasibility study for the potential extension of Ardsley Drive from Town Center to the Food Lion along N.C. Highway 24-27.

Engineers have been studying the topography of the area and any environmental issues that may come up, City Administrator Cesar Correa told city council recently. AMT came up with four proposed alternative routes connecting Town Center to Food Lion, which Cesar explained to the council.

The council approved alternative three, which AMT had recommended. This would extend Ardsley Drive to the intersection of N.C. Highway 24-27 and Renee Ford Road, while a second lane would also connect behind Food Lion to Meadow Creek Church Road. 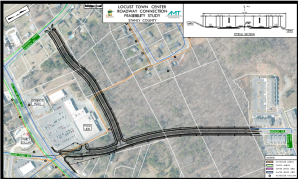 The route has already been reviewed by North Carolina Department of Transportation Division 10 and has been discussed with a few of the business owners in the vicinity, Correa said.

Some of the traffic lights might have to be arranged around the intersection, but “it will make it conducive for people that are getting out of Town Center to safely get to this intersection,” Correa said, noting that it will help redirect traffic away from the main traffic corridor in the city.

The next steps are for the engineers to determine how much grating is needed for the project, the kind of environmental impact and the total cost of the project.