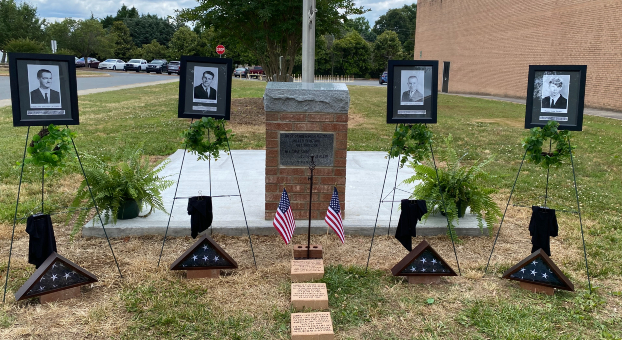 Residents from across Stanly County, many of them veterans, gathered at West Stanly High School Monday morning for the long-awaited dedication of the memorial to the school’s alumni killed in action in Vietnam. 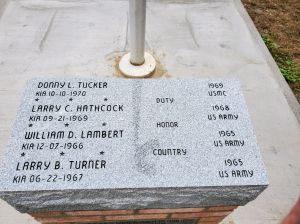 The memorial plaque lists the names of four West Stanly alumni who were killed in action in Vietnam. Photo courtesy of Steven Huneycutt.

These young men represented only four of the more than 58,000 soldiers who died during the Vietnam War. Their names can be found inscribed on the Vietnam Veterans Memorial Wall in Washington, D.C.

The memorial was the brainchild of Locust resident and Vietnam veteran Dan Burris, who was best friends with Tucker. He approached the school’s masonry instructor Steven Huneycutt in 2018 about creating a memorial beside the flagpole to honor the school’s fallen Vietnam heroes.

During the ceremony, the flag was placed at half-mast in honor of the fallen West Stanly graduates.

“We all gave some,” Burris said about the many veterans in attendance, “but these four young men…they gave all. Those young men sacrificed all their tomorrows for our future. We now have a duty to preserve what they so diligently defended.” 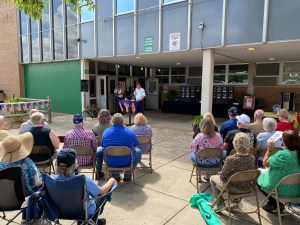 Dan Burris speaks to the crowd during the dedication of the Veterans Memorial at West Stanly High Monday morning.

Burris received roughly $3,500 in donations from more than 30 people who felt moved to contribute. He figures that without the donations, the project would have cost around $2,800. He estimates that the construction ended up costing around $800.

The memorial was sponsored by the West Stanly Class of 1969 along with 38 other groups and individuals, including the Stanly County Veterans Association, American Legion Post 76 and VFW Post 6365.

“They shared their lives so briefly and their precious memories have lingered in our hearts for so long now…that it’s our job to share their stories,” Burris said, before calling upon family and friends to share memories of the four soldiers.

Larry Turner’s longtime friend Eddie Funderburk mentioned that they enjoyed playing soldiers together (they both wanted to join the Army) and looked up to their fathers, who had served during World War II.

A member of the 173rd Airborne Brigade, which was the first major United States Army ground formation deployed in Vietnam, Funderburk said his friend always wanted to be active and in the middle of things.

“Where there was action that was going to happen, that’s where he wanted to be,” Funderburk said.

N.C. Rep. Wayne Sasser, who grew up with Hathcock, noted how dedicated and diligent he was with anything he pursued in life. Every Saturday, Cecil rode his bicycle as he sold five cent grit newspapers.

Sasser told the crowd that each week his father would purchase a paper “because he knew Cecil was coming by.”

“That’s the kind of dedication that these four young boys gave to this community and to this country,” Sasser said, noting that he felt bad it took so long for them to be properly recognized.

Reading a statement from Cecil’s sister Carolyn Foreman, his nephew Terry Foreman said Cecil had a “contagious laugh,” adding that “Cecil would laugh so hard you had to laugh with him.” The oldest of four kids, Foreman said he loved to play pranks and was both the instigator and peacemaker in the family.

William Lambert’s sister Judy Meggs described her brother Billy as an easygoing, loyal friend who enjoyed fishing, hunting and camping. His dream was to eventually join the Army, she said.

Trained as a military medic, Billy wrote to his mother not about the carnage he witnessed, but about the friends he had made, the countryside and the animals.

“He did everything he could to spare her feelings and give her a sense of calm,” Meggs said.

Billy deferred taking off for R&R (rest and recuperation) and instead swapped his time to allow his friend to meet up with his wife. Shortly after, Lambert was killed by a remotely operated landmine.

Several years ago, the friend’s children contacted Billy’s family, telling them “how much they admired and appreciated our brother Billy for what he had done,” Meggs said.

Born only a few days apart, Dan Burris was best friends with Donny Tucker and his brother Ronny growing up in the Ridgecrest community. He said they were like the “three amigos.”

After they graduated from West Stanly in June 1969, Burris and the Tucker boys did what so many other young people were doing at the time: they enlisted in the military, specifically the Marine Corps, to serve their country.

Burris was in boot camp at Parris Island, South Carolina when he got the news that his best friend was killed in action on Oct. 10, 1970. Tucker was less than two months shy of his 20th birthday.

Burris dealt with feelings of guilt after his service, knowing one of his best friends would never be coming back.

“I never saw combat, but I still got guilt because I lived and he didn’t,” he told the SNAP last year. “You can’t explain why you walked away and somebody else didn’t.”

The Vietnam memorial was a way for Burris to honor not just his friend but the three other men who died defending this country.

Burris is working with the school’s JROTC and instructor Maj. Wallace Reed to create a brick garden, which will run from the sidewalk to the memorial. At least 50 bricks have thus far been purchased.

The plan is also to create a Purple Heart wall, Burris said, honoring all of those in the community who were killed or injured in battle.

Even though they’re gone, Burris said the memorial will allow Tucker and the three other fallen soldiers to live on in the memories of current and future students and staff.

“He didn’t have these past 50 years, those other guys didn’t either, but they’ll be there after I’m gone,” Burris said.

Several speakers, when describing the heroism of the four soldiers, alluded to the Bible verse of John 15: 13, which reads: “Greater love hath no man than this, that a man lay down his life for his friends.”