Megan Sullivan was scrolling through social media a few months ago when she stumbled upon a recent trend of people animating and enhancing videos and photographs, including ones dating back before the 20th century.

The technology immediately resonated with Sullivan, who is the museum director for the Stanly County History Center.

The genealogy website MyHeritage created a tool, called Deep Nostalgia, to digitally animate the faces in historical photos, especially people’s facial features. It also has MyHeritage Photo Enhancer, which brings blurry and low-resolution photos into focus by increasing their resolution and sharpening the faces that appear in them, according to the website. Old photos can also be colorized.

“We have so many pictures in our collection and I was like, ‘Gosh, this would be really great and interesting to be able to utilize this with our collection,’ ” Sullivan said.

Her curiosity piqued, Sullivan called officials with MyHeritage, telling them she was interested in using the technology for her next museum exhibit. They helped her get a year membership to use the technology.

Sullivan uploaded around 60 pictures that have now become digitally enhanced via Deep Nostalgia, either becoming colorized, animated or both.

“It’s literally the click of a button and they do it for you,” Sullivan said.

These photos make up the History Center’s “Live and in Technicolor” exhibit, which will run through August.

Sullivan said the oldest photographs on display that have been either colorized or animated date back to the 1840s/1850s. 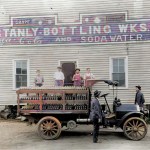 Stanly Bottling Works, which was located on the corner of South Street and Depot Street. Photo courtesy of Megan Sullivan. 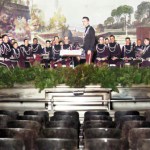 The Badin theater circa 1920s. Photo courtesy of Megan Sullivan.

Though the pictures that were selected to become digitally enhanced are not part of a coherent theme or narrative, many of them involve groups of people or portraits of individuals along with streetscapes of late 19th century and early 20th century downtown Albemarle.

While people can come visit the exhibit in-person, Sullivan is working to create a virtual exhibit that people can experience, which should be on the History Center’s website in the coming weeks.

“I think this technology helps humanize these people…this really gives them an added dimension,” Sullivan said.

The History Center has more than 1,000 photographs in its database, so it was a real trial and error to see what types of picture lent themselves best to the technology. Sullivan, for example, found that pictures of men in the late 19th century with pronounced facial hair did not work well with the digital enhancements.

She has also added some relevant artifacts that related to some of the subjects on display. There is an enhanced early 1900s picture of a woman in a wedding dress with the exact dress beside the photo while there is also a 1940s photo of the old Alameda Theater with actual theater seats on display. 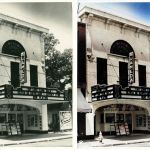 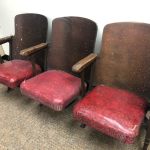 Actual seats from the Alameda Theater.

Though it’s only been around for a few weeks, Sullivan said people have really enjoyed the enhanced images.

“We’ve had some people come in and they told me they’ve gotten chills and goosebumps on their arms,” Sullivan said.

She hopes the exhibit will help challenge the notion that history is somehow boring and static.

“I feel like a lot of people tend to generalize history and people I think see the past as boring and it’s not and this really helps to bring it to life and really humanizes all the people that were here before us,” she said.