Design concept for the entrance to the King Alley that city staff is working to renovate.

She is a member of the Downtown Vitality Project Team, which is working to implement the projects to help revitalize the area.

The city first acquired the alleyway, which is beside the old Davis Drug building on West Main Street, from the county in 2019. Since then staff members have been working to renovate it to create a gathering space people can utilize and enjoy.

There was a stakeholders meeting earlier this year, where city staff got feedback from surrounding property and business owners.

“The design itself changed drastically from their feedback based on what we originally had,” Hardy said.

The Downtown Vitality Project Team, which consists of several city department heads, is working with McAdams, a landscape architect firm in Charlotte hired to develop the alleyway design.

While the concept is still theoretical and things can change, according to a powerpoint featuring design images, the alleyway will be a pedestrian plaza with seating (benches, tables and chairs) for outdoor dining and casual gathering along with overhead string lighting and decorative poles and significant green space, including planters that can be adjusted for the seasons.

Other amenities discussed include artificial turf with cornhole boards, a giant, brightly-colored mural on the side of one of the buildings, a portable stage for summer concerts and a giant movie screen.

The northern-most area directly behind the alleyway, which currently has eight parking spaces, could be the space to house the summer concerts and movie nights. While some parking would be lost, there would still be plenty of parking spaces in the general vicinity.

“There’s a desire to have a stage in our downtown so we can have events like we have at City Lake Park,” Hardy said. 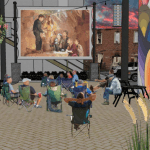 A giant movie screen could also be displayed for summer movie nights. 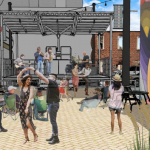 City staff has discussed creating a portable stage for concerts.

One aspect that has been talked about is creating an iconic setting in the alleyway where people would flock to for pictures, or Instagram moments” as it is called in one of the design images.

“It’s something that everybody wants to stop and see and they become familiar with it and it becomes synonymous with visiting downtown Albemarle,” said Dan Lambert, landscape architect McAdams, who has been involved with the project since December.

McAdams recently worked with Laurinburg officials, Lambert said, to renovate a similar space in their downtown.

He presented council with the tentative schedule going forward, which calls for the project to be finalized and fully fleshed out by mid-August during which bids will start to be advertised. Construction will begin around October, with the project slated to be finished by early next February.