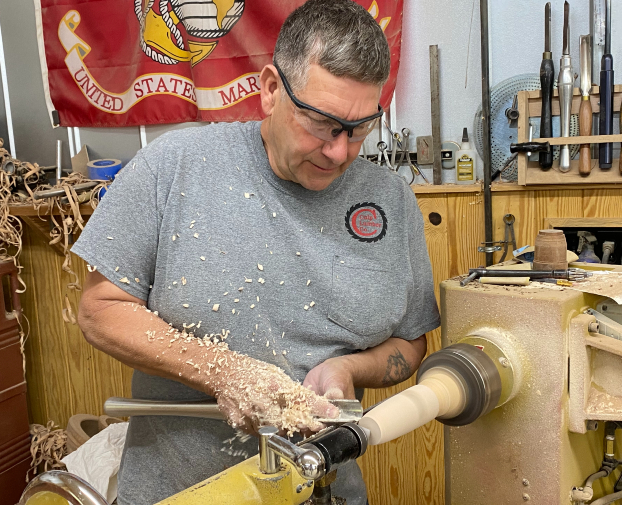 Jerry Measimer works on a piece of wood that will eventually become a hummingbird house.

Sometimes life can be ironic.

Jerry Measimer, who lives in Richfield but grew up in Cabarrus County, took a shop class in eighth grade, where he learned to turn wood into pieces of art — in this case a lamp and a baseball bat. While he was interested in woodworking in general, he didn’t take to the specific craft of woodturning and found it dull.

“I said this is stupid,” he recalled. “I didn’t like it because I didn’t understand it and I didn’t know how the tools work.”

Fast forward to 2007, when Measimer picked up a woodturning book featuring hollow, ornamental Christmas balls on the cover. The balls each had a tiny hole 16th of an inch thick.

Measimer was in disbelief with the intricacy of the ornaments — and it piqued his interest.

“There’s no way anybody could do that,” he said. “It was just a beautiful, clean piece of wood.”

He bought the book and met the author. He took classes from expert woodturners, soaking up as much as he could about the intricate craft.

“It just snowballed,” he said. “That got me hooked.” 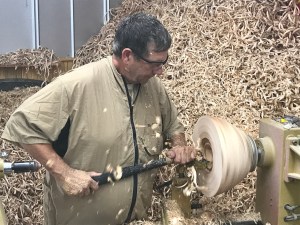 Though the former Marine has a full-time job working for Culp Lumber Company, he spends time each day in his workshop behind his house — called Shop II Woodworks Studio — turning big chunks of wood on a lathe into intricate, and often colorful, bowls, urns, frames, hummingbird houses and cowboy hats. The workshop is often filled with mounds of wood shavings.

He has made thousands of pieces since he started woodturning over a decade ago, though he’s likely most known for his hummingbird houses and cowboy hats. Much of his wood comes from local sources like A & H Millwork in Albemarle.

In addition to creating his pieces, Measimer also practices pyrography, which is the technique of decorating wood by burning a design on the surface with a heated metallic point. Many of his hummingbird houses get emblazoned with images of wheat stalks.

He has taught at numerous workshops, including a class at Pfeiffer, and has given demonstrations. His pieces have been on display at the Stanly Arts Guild, the Cabarrus Arts Council (he’s a lifetime member and former president of the wood-turning club in Concord) and the Mint Museum in Charlotte. He donates many of his pieces to local organizations and charities.

While the hummingbird houses take less time to make, for many people, Measimer is synonymous with his cowboy hats. He’s made them for all kinds of folks — including a former Miss America and musician Charlie Daniels.

He first learned the techniques for the hats during a class taught by Kentuckian Chris Ramsey, who made a cowboy hat for President George W. Bush in 2007. 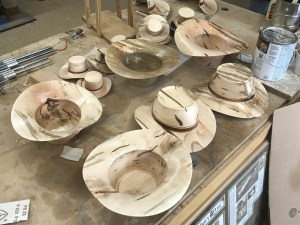 He starts with a 65- to 70-pound piece of wood. By turning, shifting and digging into it, he winds up with a cowboy hat about two hours later.

The finished product takes longer, about a week. The wood has to be bent and dried. Once finished, Measimer applies coats of lacquer and hand-rubs each hat with sandpaper. The hats are also quite light — usually between 7 to 9 ounces.

But woodturning did not come easy for Measimer; he took many classes and years of trial and error to really become comfortable with the craft.

In the early days, when he was still learning, he once threw a hat in frustration after a mistake. He sat down and asked himself: “Am I doing this for fun or what?”

It was during this moment that his thinking changed.

“That’s when I told myself I didn’t care what I made,” he said. “I just liked the process of woodturning.”

Over the years, his reputation has spread not just throughout the state but around parts of the country. He said it’s not uncommon for people to come to his workshop to watch him create. One woman who lived in New York and had a son in the area told him he was famous after she came by his property to purchase hummingbird houses.

Measimer had a busy 2019 — his hummingbird houses were featured in Our State magazine and he attended a Raleigh wood-turning symposium, the American Association of Wood-turners, where he taught classes and networked with many of his fellow woodturning friends.

He had one of his wooden cowboy hats recognized by three judges in Raleigh. Out of around 700 pieces at the symposium, the judges recognized only around 10 pieces, Measimer said.

“I was just shocked,” he said when he found out one of his pieces was recognized.

He was gearing up for 2020 to be even busier until the pandemic hit and almost all of his scheduled in-person events were canceled, though he did have some virtual ones.

“Last year I thought would be my year, where my name really got out there,” Measimer said.

He still worked each day in his workshop producing a variety of pieces — especially hummingbird houses — but he missed the connection he’s able to forge with people at many of the annual events.

“I look forward to demonstrating and teaching,” he said.

With Covid cases decreasing as more people get vaccinated, Measimer has several scheduled events happening this year including ones in Michigan and Asheville.

Shaped by his military service

Measimer plans to donate one of his wooden hats, known as Freedom, which is emblazoned with a bald eagle and an American flag and that he made out of Ash from the New London park, to raise funds for the Marines and their families. The artist Michele Parsons completed the pyrography work. 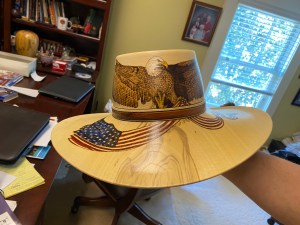 Jerry Measimer created a Freedom hat to raise money for Marines and their families.

He credits the Marines for helping to mold him into the person he is today. He left Concord High School during his junior year, at only 17, to join the Marines. After graduating from boot camp at Parris Island, South Carolina, he was briefly stationed at an army base in Maryland before heading to Camp Lejeune in Jacksonville.

During his time with the Marines, Measimer spent several months abroad as part of a NATO cruise, where he traveled throughout Europe, including England, France and Germany.

He experienced many highs and lows during his military career, which he said taught him the importance of being resilient and never giving up. The mindset has been especially helpful over the years whenever he’s struggled with woodturning.

Throughout his 14 years as a woodturner, Measimer has broken his nose, cheeks, a toe and several fingers. But he doesn’t let his injuries deter him from continuing with his passion.

“You’ve got to keep going through and pressing on,” he said.

The best compliment he’s ever received during his woodturning career occurred several years ago at Pfeiffer, after he finished a demonstration.

“Man you’re just like Bob Ross, you think anybody can do this,” one of the students told him.

“I thought that was pretty neat that I was able to explain to them that you could do something if you just give it a try and don’t give up,” he said.

Despite working on his craft each day for over a decade, Measimer never grows tired of learning more about woodturning.

“There’s always something new you can do,” he said. “Even after doing thousands of pieces, it’s pretty exciting.”

It’s also calming and relaxing to Measimer. He likes to turn the wood on the lathe while listening to the Blues or watching television.

“I love to just see the shavings fly,” he said. “I could do that all day and make nothing.”

Now, if he ever breaks a piece, he simply picks up new wood and begins the process again.

“There is always more wood,” he said.