The Talent Company set to perform ‘The Glass Menagerie’ 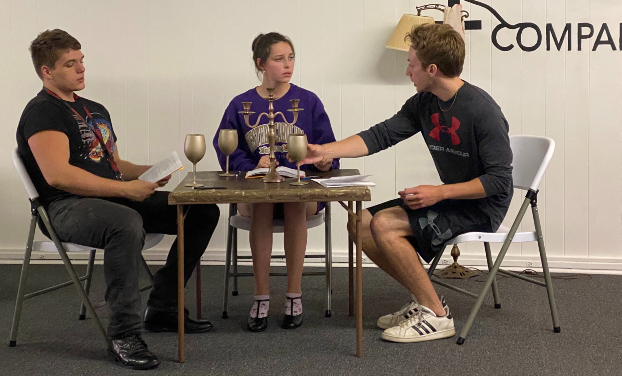 After more than a year on hiatus due to the COVID-19 pandemic, the Talent Company is busy preparing for its first production of the year with Tennessee Williams’ “The Glass Menagerie.”

It will premiere this week at Tiffany’s at the Boardroom in downtown Albemarle.

The Talent Company is a youth theater company organized to support Stanly County young people in their love of theater.

“As soon as we finished our show, in a matter of weeks, the world shut down,” said Laura Almond, treasurer of the group’s executive board and project manager for the show’s production team.

But as people began to get vaccinated earlier this year and as guidelines and restrictions steadily got relaxed or lifted, TC was given the green-light around the end of February to begin the 2021 season.

Unlike many of TC’s past performances, which tend to be well-known, iconic shows like Disney productions, “The Glass Menagerie” is an intimate, dramatic non-musical featuring only four cast members, all veterans who have performed with the group for many years.

The play, which is set in a St. Louis apartment in 1937, focuses on Tom Wingfield, an aspiring poet who works in a shoe warehouse to support his mother, Amanda, and sister, Laura. It features weighty subject matter that is likely not appropriate for younger children.

“There are some fantastic dialogues, fantastic conversations that will take place,” said director Christian Payne, a North Stanly High School English teacher and a TC alumnus. “Even though the play was written so long ago, we still find ways to connect to it.”

With the absence of any big musical numbers, the interplay between the cast, Payne said, will hopefully be what audiences latch onto.

“You’ve got to have strong actors to do a show like this because it involves very deep family emotions,” Almond said. “You have to be an actor that can show inflection and really dig down deep in the characters.”

With so much of the world turned upside down over the past year, it was decided a smaller, more scaled back production would be an easier option to ease back into performing in front of live audiences. The plan is to put on a bigger production, “The Little Mermaid,” come the fall.

Almond was happy that the high school seniors get to perform one last time before heading off to college or wherever life takes them.

“Everything just hasn’t been the same, so this just gives them a little taste of that family again and it’s an opportunity for the seniors to do something for themselves,” she said.

The play is composed of two acts and will run about two hours, with a 10-minute intermission, Payne said.

The play will run at 7 p.m. June 10-12 and 6 p.m. June 13. Tickets are $10 and can be purchased online or at the door. Patrons are encouraged to arrive early to purchase food and beverages.

TC will also offer Broadway Bootcamp for six Saturdays in the summer June 12 and 26 and July 17, 24 and 31 at TC’s downtown Albemarle rehearsal location. The camp is for rising third through 12th graders and will last from 9 a.m. until 2 p.m. Each camp day will have its own theme.

For more information about TC, including prices for the Bootcamp, visit its website.