After 26 years, Ivey leaving Cooperative Extension at the end of the month 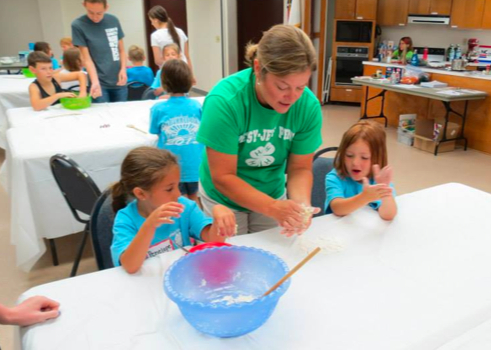 Lori Ivey is set to retire as head of Stanly County Cooperative Extension at the end of the month. Photo courtesy of Lori Ivey.

After 26 years working with the Stanly County Cooperative Extension, including 17 years as the extension director, Lori Ivey will soon be leaving her post.

Her last day with the Cooperative Extension will be June 30.

Though she will be retiring from her work with the state, she has accepted a position with GHA Autism Supports, where she will work part-time in their development office beginning July 1. 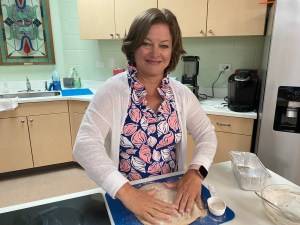 Lori Ivey making bread at the Cooperative Extension’s kitchen at the Agri-Civic Center.

‘Our line of work is impactful’

A Stanly County native, Ivey grew up in the Morrow Mountain area near Badin and graduated from North Stanly High School. After receiving a degree in home economics education from UNC Greensboro, Ivey taught for two years in Montgomery County.

After a one-year stint working for the Department of Social Services, Ivey realized she wanted to get back into teaching, just not the traditional path of working within a school system.

She began her career with the Cooperative Extension in the mid-1990s and hasn’t looked back. She started in a grant-funded position coordinating the Family Resource Center for about a year before transitioning to serving as family and consumer sciences agent for Stanly and Montgomery counties. Ivey then served as 4-H director for about four years before becoming director in 2004.

Ivey is actually a county department head but also works for the state, which she said can be a little confusing.

Each county extension center throughout the state, Ivey said, is focused around three key areas: agriculture and food, youth development and health and nutrition.

From working with local farmers, engaging with senior citizens and creating activities for young children, her career with the Cooperative Extension has allowed Ivey to interact with a variety of different groups, which she has enjoyed.

“My audience varies in age,” she said.

“This is the best of both worlds, you get to teach but you’re not confined to a classroom,” Ivey said about her time with Cooperative Extension. “Your classroom is the county.”

Ivey has also handled most of the Extension’s special projects, like heading up the Arena Steering Committee to raise money for the Stanly County Farm Bureau Livestock Arena, which would seat around 600 people and will be built behind the Agri-Civic Center. The estimated cost for the project is $3.5 million and the arena committee, though slowed by the pandemic, has already raised a little more than $3 million, Ivey said.

For many years, Ivey served as coordinator for the Senior Health Insurance Information Program (SHIIP), which provides free help to senior citizens across the state. She was trained for the program in 1995 and worked with seniors in the county until about a decade ago, when the Senior Center took over the program.

“That was probably one of the most impactful programs just because you were helping seniors and those eligible for medicare through disability afford life-saving drugs,” she said. “They depended on me each and every year.”

Many seniors in the county who she worked with still recognize her and “have fond memories of working with me.”

One of her passions during her career has revolved around food, whether it’s heading up a nutrition class or teaching young kids how to make bread. Ivey said she’s known to many people for her food safety knowledge, which comes in handy in certain situations.

She said it’s rare when she doesn’t get texts or Facebook messages from people when the power goes out, asking her to help explain what foods will be okay and what foods need to be thrown away.

Thanks to her time as 4-H director, where she taught kids about embryology using baby chicks, many young people came to recognize Ivey as the “Chicken Lady.”

“I would be in the grocery store and a second grader would see me and say, ‘There’s the Chicken Lady,’ ” she said with a laugh.

“I think what we do in our line of work is impactful,” Ivey said, noting how proud she has been of her time with the Cooperative Extension.

As she prepares for her final weeks, she said she will most miss interacting with the people she’s grown accustomed to seeing on a regular basis, from her dedicated staff to volunteers, children and farmers.

“It’s certainly been a wonderful journey and I can say without hesitation it’s a job I would do all over again,” she said.

Embarking on a new career

As this year marked 30 years Ivey has worked for the state, which is when employees are eligible to retire, she wanted a new challenge, a second act so to speak.

Ivey seriously considered and even applied for a Cooperative Extension position on the coast, but she ultimately chose to stay local and work for GHA. That way she can help care for her older family members and be around her husband Jim and son Robert, who goes to Montgomery Community College. She has an older son William who lives in Charleston.

“This was a better fit for my family,” she said.

Ivey will be doing much of the same type of work she did as extension director in terms of assisting with grant writing, fundraising and social media, “it’s just a different audience.” She will also work on special projects featuring Carolina Farms and Second Street Sundries.

Ivey said she hopes the vacant director’s position will be posted soon though in the meantime, a director from one of the surrounding counties will likely take over as interim.

A drop-in retirement party for Ivey will be 2-3:30 p.m. Thursday at the Stanly County Agri-Civic Center. People can RSVP by emailing katelyn_stegall@ncsu.edu or calling 704-983-3987.