In order to better help take care of the county’s many parks and recreational facilities, one county commissioner has come up with a plan that he’s been presenting to officials and community members across Stanly County in order to gauge their support.

Peter Asciutto proposes Stanly County earmark $100,000 in the upcoming budget to create a Parks and Recreation grant program, where each of the 10 municipalities could apply for up to $10,000 to use for capital improvements and general upkeep of their parks and facilities.

Under his plan, the county would require each municipality to match whatever they receive from the program. If approved, an application system would be created.

“We talk about Stanly County all the time as being a Gateway to the Uwharries, we have Morrow Mountain in our backyard and the lakes,” Asciutto said. “We talk about that as county commissioners, so let us help contribute to making this a better place.” 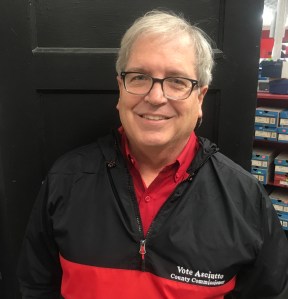 Since Stanly does not have a Parks and Recreation department, unlike many counties in the state, the costs for maintaining the facilities, which can be expensive, often falls solely to the municipalities.

“I know that with all of the municipalities, you guys bear the burden of the costs of the parks,” Asciutto told the Stanfield Town Council last Thursday.

He’s already talked to his fellow commissioners and town/city administrators about the proposal, many of whom have expressed support for his plan. He’s also talked with officials in Badin, Richfield and Locust over the past few weeks.

“I’ve talked to some commissioners and I feel pretty good that they’re open to the idea,” he said.

“We are in need of any amount of money for the park,” Ritter wrote in the email, which was shared with The Stanly News & Press by Asciutto. “The thing with Richfield Park is that very few Richfield residents use it, and it’s mainly used by others in the surrounding communities. We need to update facilities, repair the roads and possibly get some better playground equipment.”

While Asciutto acknowledged the creation of a grant program would be a “minimal investment from Stanly County’s point of view,” it would be a huge boon for the municipalities. “It kind of doubles what their money can get them,” he said.

If the grant program is approved (Asciutto said he needs support from three other commissioners), it could last for a one-year trial period after which the commissioners could reevaluate if it’s worth keeping as part of the 2022-2023 budget. He plans to discuss it more with commissioners during their budget workshop next week.

Asciutto first got the idea about six years ago during a North Carolina Association of County Commissioners meeting. When he mentioned that Stanly County lacked a Parks and Recreation department to support the municipalities, an official with the North Carolina Recreation & Park Association told him about the option of creating a grant program.

He had brought up the idea during his previous stint as commissioner, which ended in 2016, but without much community awareness of the proposal, it never gained any real traction.

“One thing I learned from my first term is I can’t just present an idea to the commissioners,” he said. “I have to get community support for it, I have to bring people into the fold.”

The Stanfield Town Council seemed to be supportive of the proposal, with Mayor Kevin Barbee urging council members to email the county commissioners in order to voice support for the program.

Barbee noted that the majority of people who play sports and utilize the town’s outdoor facilities don’t actually live in Stanfield and so this proposal, if approved, would be a great benefit.

“I don’t understand why the county is not putting money into Parks and Recreation,” Barbee said. “The county should use our tax dollars…to help with some of the costs because they are expensive.”

After speaking at the Locust City Council Thursday, many of the council members, like their Stanfield counterparts the week prior, spoke in support of Asciutto’s proposal.

“I love this idea,” said Mandy Watson, who regularly provides Parks-related updates to the council. “I think it’s definitely going to open up a lot of opportunities for our Parks department. I definitely think Locust should take advantage of the grants.”