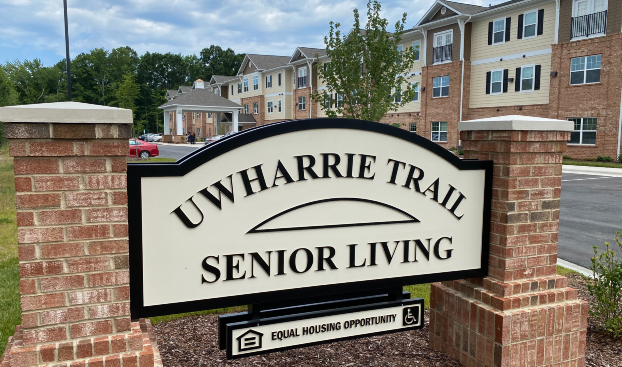 Uwharrie Trail Apartments, at 207 Barney Poplin Dr. behind Stanly Gardens of Memory, opened in March and features 80 units comprised of one- and two-bedroom apartment homes for people 55 and older.

Each unit offers a kitchen (including a stove, refrigerator and dishwasher), at least one bathroom, washer and dryer and carpets in the bedrooms and living room. There are also two elevators, a communal kitchen, fitness center, multi-purpose room, a picnic area and rooms for extra storage space.

SCUSA is also available each day for residents’ convenience for doctor appointments or just a ride to procure items at the local grocery store.

Based on surveys conducted by the government, it was determined that more senior housing was needed in the community, according to Angie Eudy, property manager with Uwharrie Trail. According to 2019 U.S. Census data, about 21 percent of Albemarle’s population was comprised of people 65 years and older, about four percentage points higher than the state’s share of seniors.

Uwharrie Trail is part of Wynnefield Properties, which has four other facilities in Stanly County: Henson Place Apartments in Albemarle and Town Centre Apartments, Ardsley Commons and The Village, all of which are in Locust.

Wynnefield, which is based in Jamestown, operates many facilities across the state, though Uwharrie is the biggest, Eudy said.

“All of Wynnefield, we have never built an 80-unit property,” Eudy said.

Construction began in early 2020 and the facility was set to open in December but was then delayed a few months until March. 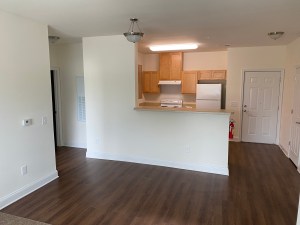 For security purposes, police regularly patrol the property and residents have to use a door code to gain access to the building.

“This is my kindred family”

There are 44 units currently occupied with 10 more set to be occupied in the coming weeks, Eudy said. About half of the residents are not from Stanly County, with many originating from outside North Carolina including West Virginia, Texas, Ohio and California.

Eudy anticipates that within the next two months, most if not all of the 82 units will be occupied. There are 302 people on the waiting list.

Most residents live by themselves, though Eudy noted there are a few couples. While the ages range, Eudy said most people at the facility are around 60 and 70.

Tina Prislusky came to the facility from Ohio after her sister, who lives in the county, found out about it. She wanted to be closer to her family.

“Her and my brother-in-law drove by and saw it and she said, ‘Tina, we got a place for you,’ ” said Prislusky, who’s lived at Uwharrie Trail since it first opened in March.

In interviews with several of the residents, they said the best part about living at the facility has been the friendships that have been formed and the tight-knit community that now exists. Around a dozen residents, who call themselves “the Posse,” regularly eat with each other and talk for hours each night in a circle in the parking lot.

“We tell jokes, we laugh and carry on,” Prislusky said.

“We have a great time,” said Ketta Cooper, who’s from Norwood and was previously living in Town Centre Apartments in Locust. “I have a blood family, but this is my kindred family.” 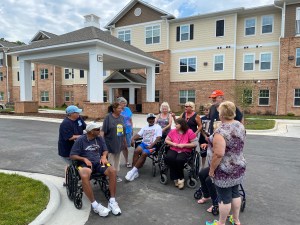 A small group of residents calling themselves the Posse meets outside each day to chat.

Many of the residents have bonded over shared life experiences, including health struggles.

“This is a senior living community, there’s something about every one of us that we connect to,” Cooper said. “We all have health issues and it brings us all together as a family.”

Several members of the group hail from other states. Paul Gainey and his wife are from Texas, while Dee and Denny Chapman are from West Virginia. Another member of the group, Steve Shannon, hails from New York. Many moved to Uwharrie Trail as a way to reconnect with family who live in the area.

The Chapmans, who have been at the facility since late May, have family in Locust and made the journey from West Virginia to be closer to their new grandchild.

“These people, when you first come, they make you feel welcome, just like they’ve known you forever,” Dee Chapman said about both the staff and fellow residents.

And the group is paying it forward as they’re quick to introduce themselves to new tenants, especially those new to the area.

“There’s not one of us when somebody else comes up that we don’t say ‘hey,’ ” Cooper said. “We always introduce ourselves.”

Eudy appreciates the tight-knit sense of community and family that the tenants have cultivated amongst each other in such a short time.

“They’re all caring people,” she said. “They look out for each other.”