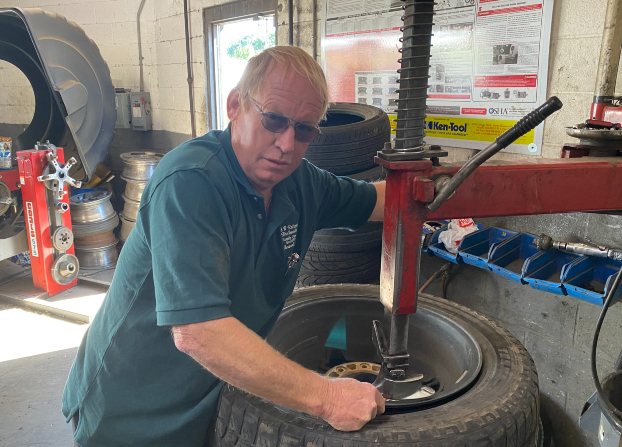 Reggie Barfield works on a tire.

Throughout the many decades, family-owned M&R Retreading and Oil in Norwood has navigated through many challenges including a recession, a fire and the pandemic. Each time, though, the company has battled adversity and kept chugging along.

Partly as a result of its resiliency and ability to adapt, the company, at 337 W. Whitley St., is celebrating its 50th year of providing reliable service to the community. An anniversary celebration will be Saturday at the company beginning at noon. It will include door prizes, giveaways, hot dogs, hamburgers and live music.

“I’d like to thank the community and all the friends and families who have supported us through the years,” said Reggie Barfield, who owns the business with his brother, Ronnie, and nephew, Paco.

Despite the obstacles and tough times, the key for Reggie Barfield has been “knowing that it’s going to be a challenge some days but going in with a positive attitude that we can do it.” 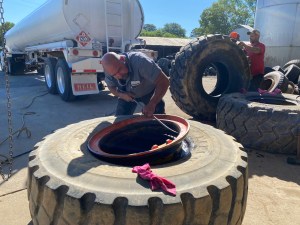 M&R’s origins can be traced back to Barfield’s father, Rossie. He originally ran the Esso Service Station in downtown Norwood. Once the local Goodyear store went out of business in the late 1960s, Rossie went to the auction and purchased some of its tire recapping equipment.

Rossie teamed up with his wife Carolyn’s first cousin, James McSwain, who had experience recapping tires, and they opened Norwood Recapping in 1969. Two years later, Rossie sold his share of Esso Service to his partner and transitioned to working full-time at the recapping business.

“Between the two owners, they had a total of seven children and he (Rossie) didn’t foresee the one business supporting the two families,” Barfield said of his father’s decision to leave Esso Service.

Barfield and his three brothers (Mickey, Kenny and Ronnie) grew up helping their father with the business.

“We learned it wasn’t optional” about working for their dad, said Barfield, who began working full-time once he finished high school in 1980. “If you were going to eat his food at home, you’d better get the work done.”

By 1983, after McSwain had left the business, it was officially incorporated and the name was changed to M&R in honor of the oldest son, Mickey, and Rossie. After overseeing the business since its inception, Rossie retired that same year and his four sons took over.

In the decades since, M&R has expanded its operations to include a car care business across the street in 1993, which focuses on brakes, alignments, oil changes, minor repairs, and a precure retreading shop in 2002 for truck tires.

The business suffered a major setback in July 2006, when a fire destroyed the building. Around a dozen fire departments responded to the blaze, which resulted in $1 million in total losses, according to a Stanly News & Press article. To complicate matters, the company did not have any insurance.

After many decades of growth and establishing a reputation in the community, M&R had to start over from scratch. While the building was being rebuilt, the company still retread tires as it simply moved across the street to M&R Car Care.

The new building was completed only a few months after the fire and M&R celebrated with a grand opening in November.

“We were back up and running, new building and everything,” Barfield said.

A few years later, in May 2008, Mickey sold out and ownership was divided between Reggie, Ronnie and Paco. This coincided with the Great Recession, and there was great uncertainty about how long the family could keep the business afloat.

“There were some long, long days of stressing and worrying about are we going to make it,” Reggie Barfield said. But the company focused on “providing quality service and fair prices” and it was able to survive.

While many businesses struggled over the past year with the COVID-19 pandemic, M&R, which was deemed an essential business, thrived.

“We had the best year we’ve ever had,” Barfield said, adding that none of his employees missed time or contracted the coronavirus. He suspects the reason the company did so well is because “when people are out of work, they ride more.”

M&R, which employs 18 people, has also had to adapt to changing times. Back in the 1970s and 1980s, for instance, the company was retreading about 500 passenger tires a week; but after losing much of its equipment in the fire, the company pivoted and now retreads about 200 commercial trucks a week.

The company does not exclusively provide services to only automobiles.

“We’ve tried to be full service from your smallest tire for your lawnmower to whatever size piece of equipment you have,” Barfield said. 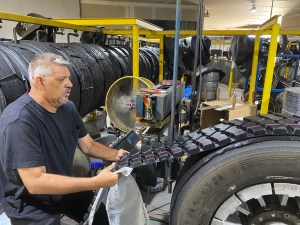 M&R has also increased its efficiency over the many decades thanks to a large network of vendors that it’s worked with.

“We can get products sometimes when the other customers can’t because we have established relations with our vendors and they know that we know the industry when we call,” he said.

In addition to retreading and providing new tires (the company offers Michelin, Firestone and Hercules), the company has always provided home heating oil. M&R offers heat fuel and off-road diesel for a variety of customers.

A focus on the customers

Reggie Barfield, 58, attributes the company’s longevity and success to the lessons his father instilled in him and his brothers. Aside from working hard each and every day, they were taught to “be fair and honest to your customers, but still make a profit,” he said.

And the emphasis on keeping the business in the family continues to this day. Barfield’s daughter and niece also work there.

The company routinely goes above and beyond for its customers. M&R has acquired several service trucks over the years, which has allowed employees to travel to farms and other locations to change customers’ tires on-site.

Barfield and his staff provide emergency roadside assistance for most cars, trucks, trailers and 18-wheelers across a roughly 50-mile radius, which often involves them traveling to other counties to ensure their customers receive top-notch service.

Steven Shaver, a tire technician, said the best part of working at M&R is establishing “one-on-one relationships with customers.”

“This is about the only place that you can come in, get a set of tires and leave in a timely manner,” he said, noting that unlike many similar businesses, M&R doesn’t require appointments.

Stan Whitley, who works for South Central Oil Company and has been a customer for around 20 years, appreciates M&R’s dependability.

“Anytime you have any kind of trouble, just give them a call and they’ll either send someone out or if it’s local, come on by and they’ll jump right on it,” Whitley said. He noted that one time, Barfield traveled to Charlotte in the early morning to provide roadside assistance along the side of I-485.

It’s the “family-run atmosphere” and “treating customers like family” that separates M&R from similar companies, Barfield said, noting that he even has some fourth-generation customers.

“They’re loyal, they depend on us and they trust us,” he said.